JConcepts HQ made the trip up to the gorgeous mountainous countryside of Oakland Mills, PA for the 2021 ROAR 1:8 Off-Road Fuel Nationals. LCRC Raceway is a premier facility ran by Christa & Kevin Mummah who have dedicated a ton of time to the well-being of their facility and race program. We arrived on site Tuesday afternoon and set up for the week ahead. For what was to come next wouldn’t be easy, but it could reap major reward. The team put their heads down and quickly got to work. Wednesday was track hosted practice that ended at sunset and that’s when the band rolled in and the taco truck pulled up for the drivers social. Drivers would enjoy themselves for the evening before getting back to it Thursday morning for ROAR sanctioned practice and seeding. Friday is when qualifying would take place and move into Saturday. With the summer rain moving in we would only get 3 rounds of qualifying.  Check out the Full Album of Photos Here.

The team experimented with a few tire choices through the week. The weather was a beautiful 75-80 degrees with a breeze. However, come main day things would heat up in more than one way. The temps would get closer to a sunny 88 degrees and in the direct sun, it was hot. Blue Rehabs or Reflex were the most popular tire choices early on and through qualifying. After receiving a lot of rain Saturday evening, drivers who ran earlier Sunday morning, ran Greens for the 10 min mains. Come time for the finals Ryan Maifield was on blue Stalkers in Buggy and Reflex in Truggy. What he quickly began to realize was that as the tread wore down and got closer to slicks the faster they became. Ultimately, he went on to win both classes with that method.

Dakotah Phend automatically made it in to the Final for being the TQ. Everyone else had to compete in the semi finals.

Setser and Rivkin bumped from the B. It was a stacked race, and there wouldn’t be any mercy. Mechanics started to line the starting grid waiting for their trucks to align. They performed one last fuel up. The crowd was quiet. “Down and quiet.” The tone went off and the competition was on. Maifield, Phend, & Tessmann led it off. Jones started to move up. Jones, Phend and Maifield then started to pull away from the pack. Phend was giving Maifield a run for his money they both wanted it bad but we still had 43 min to go. Phend flamed out, Maifield’s lead lengthened. It was heart breaking for Phend but his team got him back out quickly. It wasn’t over for Phend. Tessmann was trying to chase down Maifield. However, they were spacing out it was Maifield, Tessmann, Tebo, Cavalieri, and Rivkin. Chaos began to erupt. Ogden flamed out. Setser flamed out. VanDalen flamed out. Pit Lane was getting hectic, but these guys are the best of the best and they got back to work. It was hot, 84 degrees and direct sunlight. Maifield was running low 34 second laps. 34.6, Maifield took the new hot lap. His tires were wearing and he was only getting faster. Maifield and Tessmann were now 5 seconds apart. He was cruising but he knew nothing was guaranteed until he crossed the finished line. Maifield and Tessmann go in and out of pits on the same lap. They were about 6 seconds apart now. Tessmann was 13 up on Cavalieri with 21 minutes to go. Rivkin was only 1.5 seconds back. 8 minutes to go and Maifield had a 18 second lead on Tessmann who was in 2nd. Cavalieri and Rivkin were in 3rd and 4th. Tebo and Jones were battling it out. Jones wanted that top 5 spot so bad. Maifield and Tessmann lapped the field and were the only drivers to achieve 77 laps. Maifield finished with a 14.4 second lead on 2nd place. Maifield led the race start to finish with his lap times only getting faster as the race progressed. It’s always so impressive to see how fast he goes while keeping a high consistency rate.

Dakotah Phend led the way with Maifield right behind him. Rivkin was looking for a way around Tebo to move into that 4th place spot. Maifield took over the lead early on. Phend was not going to let it go. Fuller moved up 5 spots. Phend was in 3rd. Tebo was in 2nd. Fuller was in 5th place, they’re all a little spaced out but one mistake and it could change up. After pit stops Maifield was in 3rd but within 3 laps got back out in front. There was still 51 minutes in this race, it was far from over. Maifield regained the lead with 50 minutes to go. Dakotah was hunting down Horne to regain 2nd place. Fuller and Rivkin were meanwhile battling for that 5th place spot. We were about halfway through with 28:45 left in the race and It was Maifield, Phend, Horne, Tebo, and Tollard as your top 5. In the last 12 min Maifield turned a fast lap of. 33.8 seconds. Again, his tread was diminishing and his speed was increasing. Maifield was cruising with 7.5 minutes to go and a lap up. Tebo was on Horne’s tail he just needed to hold tight to 2nd. Maifield only fell back to second place one other time which was after the 2nd pit stop. After that he was never lost the lead. His pit crew was on fire and he drove incredibly! He was the only driver to achieve 104 laps! The race concluded and drivers celebrated each other on their accomplishments before exiting the stand, a true moment of sportsmanship.

For those of you who love stats here are a few about Ryan Maifield from the weekend:

It was an incredible week at LCRC Raceway for the 2021 ROAR 1:8 Off-Road Fuel Nationals! Congratulations to Horne, Tessmann, Tebo, and Cavalieri on their podiums as well! We saw several notable performances and are proud of all of our drivers. It was such a pleasure to see Maifield’s passion and joy after winning the buggy final because it had been 2 years since he made that main. We are ecstatic for him! Up next, we have the JConcepts Summer Indoor Nationals at Hobby Action Raceway in July! 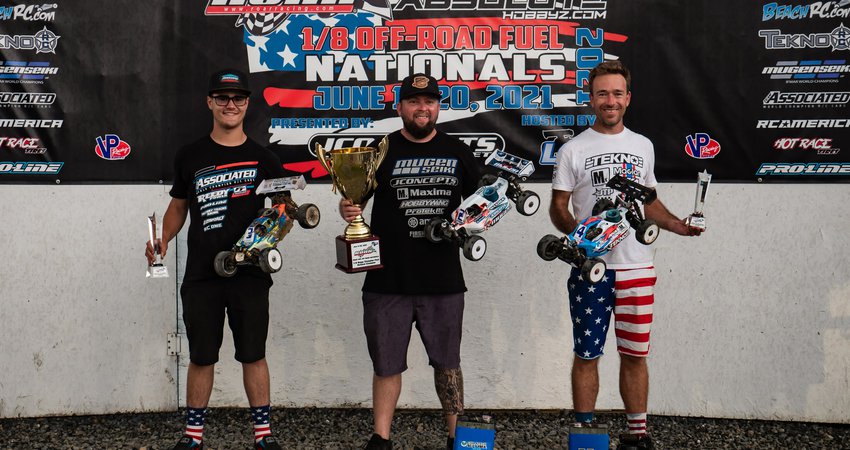 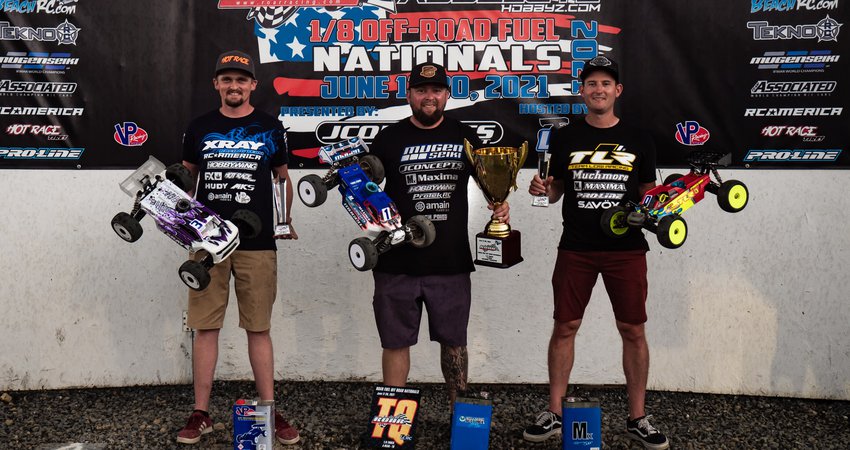