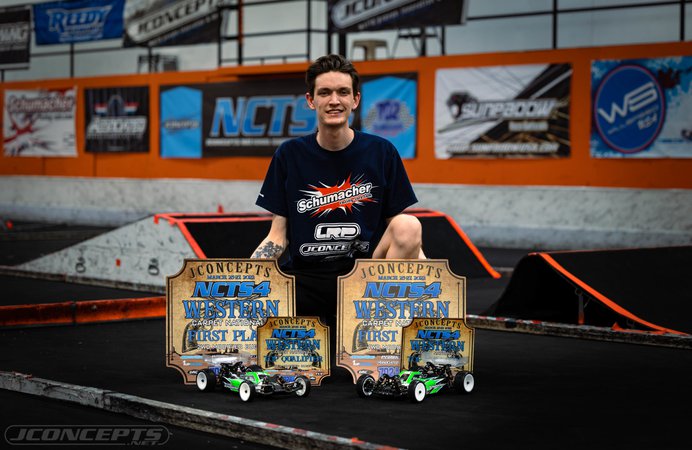 This past weekend we officially kicked off the NCTS4 series at 702 Raceway in Las Vegas, NV! With record-breaking numbers, we were excited to have our biggest opener yet! 702 Raceway is a beautiful carpet track facility complete with a stocked hobby shop, 1:10 scale carpet track, and a mini-z track! It’s the perfect spot to tack on to your Vegas trip if you’re looking to get some racing in! With 180 entries, the competition was pretty stacked, and it would not be an easy journey to the podium. The NCTS4 series has a pretty standard format with practice/seeding on Friday, 3 rounds of qualifying on Saturday, and Triple A-Mains on Sunday.

The track layout flowed well, was enjoyable, but still challenging. You can check out the layout above which features a tabletop, a sweeper, a ski jump, a long straightaway, and more! The event was open tire for all classes, and saucing was not allowed. Most drivers appeared to gravitate towards the Fuzz Bite tire, and it proved to be successful! Take a look at Broc Champlin’s winning tire guide at the bottom of this race report for more info. 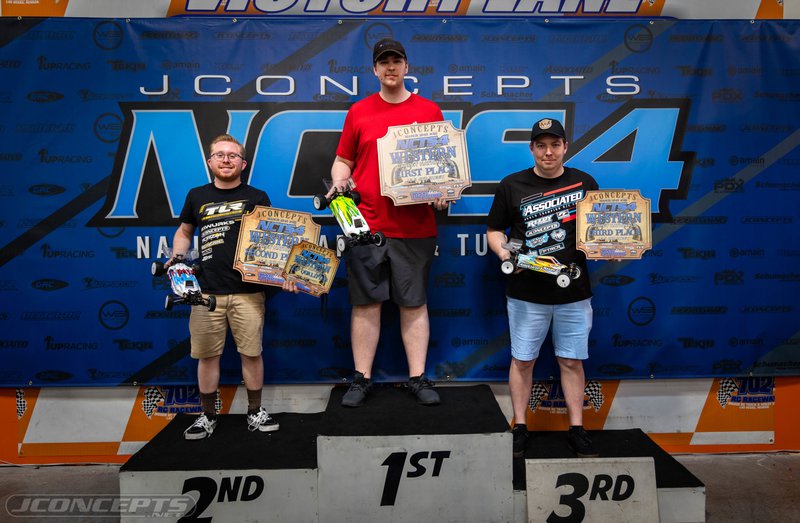 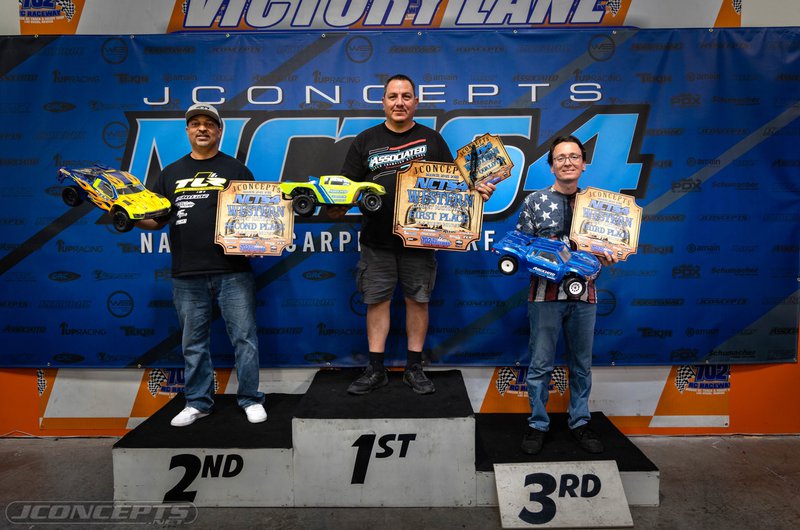 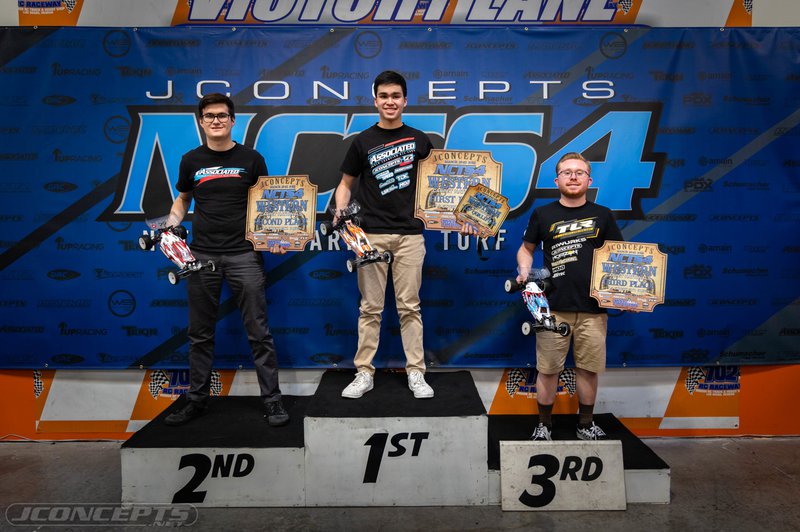 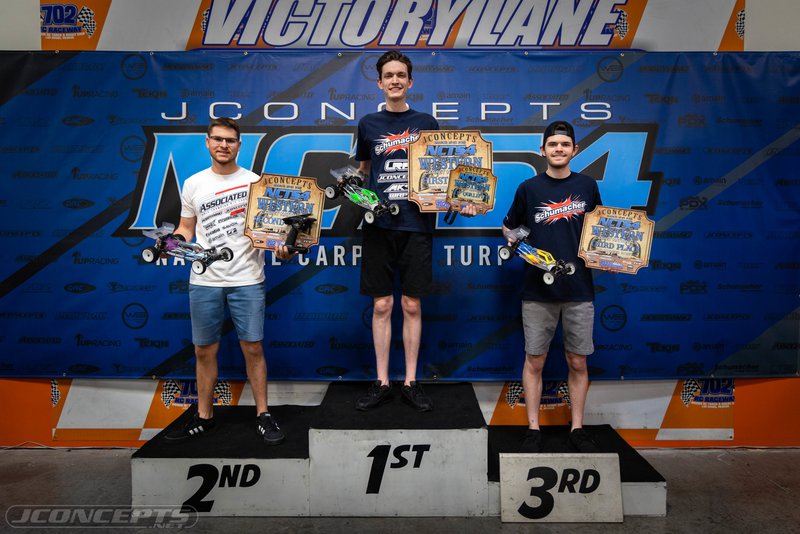 A1: Broc Champlin led the way, with Spencer Rivkin on his wing. Carpet racing does not allow any room for error. 3 laps in, Broc got it wrong in the far corner after the roller jump, which allowed Rivkin to take over first. Brandon Foote moved into 2nd and Blake Champlin moved into 3rd. Foote was trying to hang onto 2nd and Blake Champlin was looking to make a pass on Foote. Foote got it wrong in the sweeper, Blake took over 2nd. It was only moments later Broc worked his way back up and passed Blake. Broc was hunting down Rivkin for that A1 win. The final tone went off, and Rivkin was able to hang on for that win, with Broc in 2nd, and Blake in 3rd.

A2: The race starts off smooth, but pretty soon into it, Rivkin snagged the pipe which allowed Foote and Blake to move into 2nd and 3rd place. The race was far from over though! Blake made a mistake in the same section as Rivkin on the next lap. This allowed Rivkin to take back 3rd place.  Broc Champlin was once again trying to check out in 1st place. Rivkin was making time up on Foote for that 2nd place position. Less than a minute to go, Foote was holding strong but caught the pipe as he went on to the straightaway and Rivkin was there to capitalize. The tone went off and it finished as Broc (1st), Spencer (2), and Foote (3). A3 would determine who would take the overall win!

A3: This was it, the stakes were high going into this final round. Rivkin immediately laid the pressure on Champlin. As they went through the first lap, into the wagon wheel, Rivkin went over the top of Champlin on accident but was able to cut to the inside line without wrecking Champlin. Rivkin was trying to run away with the lead. Meanwhile, Blake and Foote battled for 3rd.  Rivkin and Champlin were close together, they went over the step-down, and as they made their way to the first double, Broc made the pass into 1st. There was about 1:45 left on the race clock. Blake moved up into 2nd and Foote moved into 3rd. The race clock expired and Champlin took his 2nd win of the weekend! 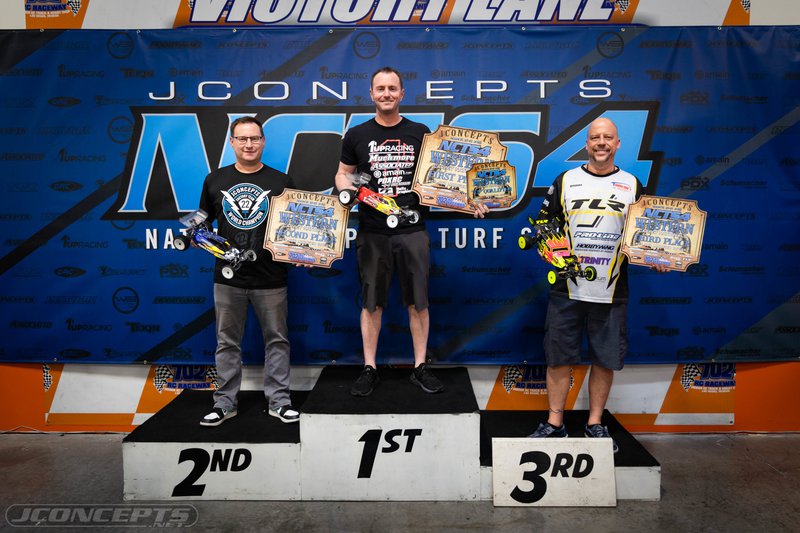 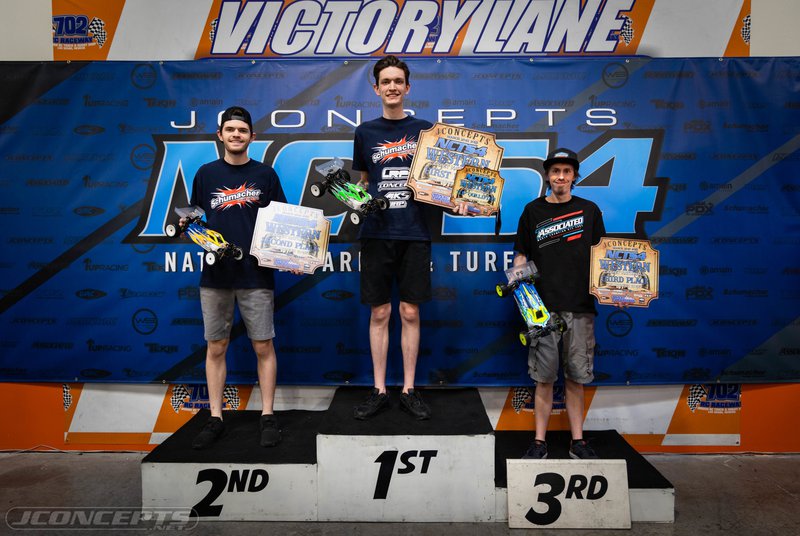 A1:  Broc Champlin tried to check out early, surging away from the pack. Rob Gillespie was running strong in 2nd, trying to ward off Blake Champlin in 3rd. That would be the primary battle of this race. Right before lap 6, Gillespie went a little wide before the straightaway and Blake capitalized, taking the inside line into 2nd. Meanwhile, from 10th on the grid, Rivkin was working his way up through the pack. He was in 4th place with a minute left in the race. He was in the battle with Gillespie and Blake. Blake made a little mistake in that back jump section, which allowed Gillespie and Rivkin to slide right by. Gillespie was pushing hard to hang on to 2nd, Rivkin was applying a lot of pressure in that final lap. Gillespie was able to hang on to 2nd overall.

A2: A2 of 4wd Modified Buggy would go on to be relatively uneventful. Broc led the way, looking to wrap up an early win. The main battle was between Gillespie and Blake for 2nd place. Gillespie got a little loose going through the wagon wheel, which allowed Blake to take the outside line and then cut inside to take over 2nd. Gillespie still wanted it and was putting the pressure on Blake. He was waiting for a moment to make a move. Meanwhile, Rivkin was continuing his way up through the pack. He was battling with Austin Cracknell for 5th place. Broc Champlin was cruising out front with nearly a 6 second lead on the field. Rivkin was on Yoshii’s wing, and Yoshii was chasing down Gillespie for 3rd. Rivkin tried to make a pass on Yoshii over the final jump, but Yoshii got away. The race finished with Broc in 1st, Blake in 2nd, and Gillespie in 3rd. That was all Broc needed to take an early win!

A3: Broc sat this one out, as he already secured the overall win. Rob Gillespie led the way, with Blake Champlin behind him in 2nd. Blake and Gillespie glided around the track, both trying to improve and defend their positions. As they made the turn onto the straightaway, Gillespie went a little wide and Blake sent it through the gap into 1st. 2 minutes to go, and Gillespie was hunting him down, hungry to take back his 1st position. Meanwhile, Harley Yoshii had an unfortunate break, which allowed Austin Cracknell to take over 3rd.

A huge congratulations to Broc Champlin, Jovy Levin, Oscar Ramirez, and Joe Pillars on their wins! This was Broc Champlin’s first time winning both classes at the NCTS season opener and he was ecstatic! Thank you to Dwayne and Patricia Battie for hosting us again this year! Lastly, a big shoutout to our sponsors: Hobbywing, WillSpeed, ProtekRC, 1up Racing, Tekin, Amain Hobbies, Team Associated, Reedy, Schumacher, DRC, TLR, PDX Underground, and Sunpadow. Up next, we’ll be at the Psycho Nitro Blast in White Pine, TN.

Tire wear for each driver was different and varied based on personal preference. From what we’ve observed, here’s our rule of thumb:

1 Run Tires: Most crisp and fast

5+ Run Tires: Have a softer or pushier feel but can be pushed harder.

Note: You can get more run time out of the tires in stock classes compared to modified ones. Overall, most drivers should be able to get 8-10 runs pretty easily. 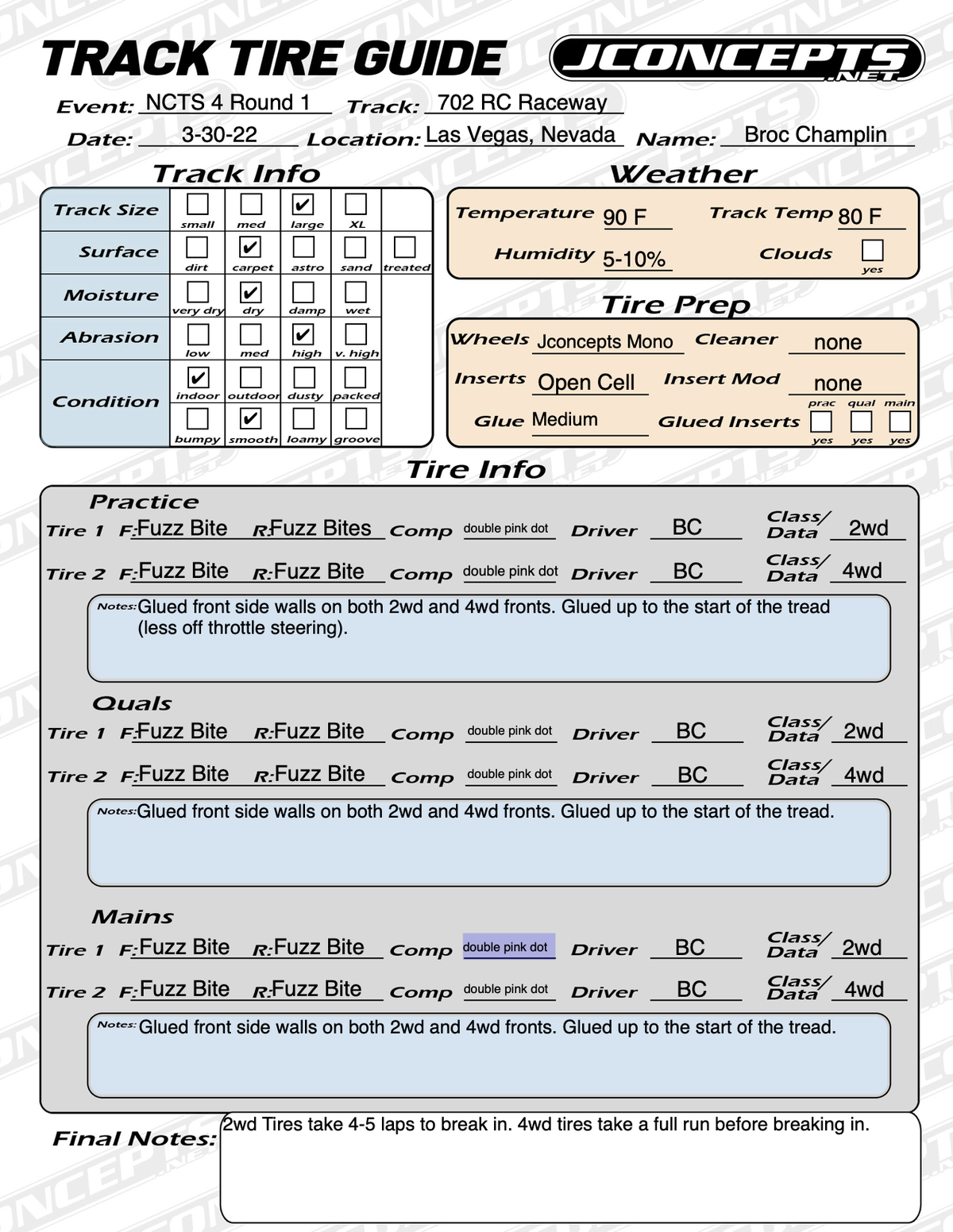