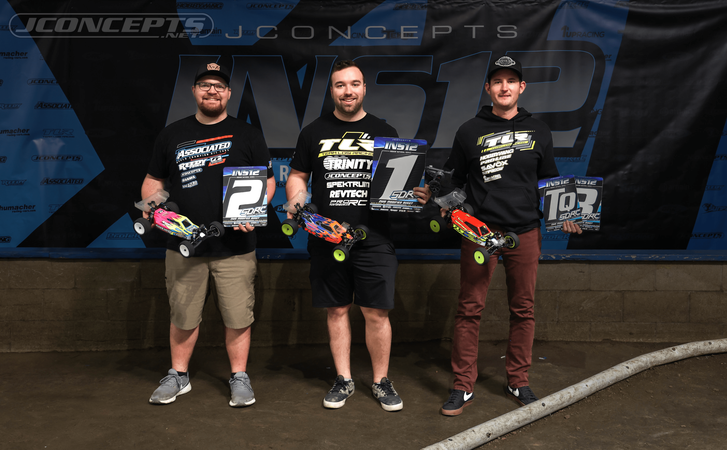 JConcepts is stoked to officially kick off the 2022 Indoor National Series! This is the 12th year of the INS series and with that, we’ve decided to switch things up a bit! New to the series this year is SDRC Raceway in San Diego, California! We thought it’d be perfect to visit in February making it our Winter Indoor Nationals. We arrived Thursday, ready to get on the track and set up for the weekend. The facility has many features such as lighted indoor pit areas, tire wash center, hobby shop, indoor 1:10 scale track, and an outdoor pit area as well. Check out the track layout below from various angles!

Tires were predictable, with drivers using Silver sanded down Ellipses or Smoothie 2s. Dakotah won with the RM2 foams in the front paired with the JConcepts Sidewall Support Adapters. In the rear, he ran the grey dirt-tech foams. As for tire usage, drivers only needed 3 to 4 sets per car to get them through the weekend which included 2 practice days, and 2 race days. The program remains the same as historic INS events. We had one round of seeding, 3 rounds of qualifying, and triple A-mains for the mod and expert stock classes.

A1 of 2wd Modified Buggy was pretty uneventful up until the last two laps. Tollard ran the majority of the race in 3rd with Phend in 2nd, and Cavalieri leading the way. In the final laps, Phend made a mistake allowing Tollard to move into 2nd. On the last lap Cavalieri rolled it over, and Tollard got by for the win! A1 finished with Tollard in 1st, Phend in 2nd, and Rivkin in 3rd.

A2 is always a highly anticipated race as it could determine who would win the overall right then and there. Those top 3 drivers plotted safely around the track for the first several laps. It wasn’t until lap 7 that Phend had a bobble and Tollard took over 2nd. Tollard was trying to run with it and Phend was not having it. Meanwhile, Maifield made his way from 7th to 5th and then to 4th. With a handful of laps to go, Tollard stumbled and Phend got by into 2nd. The race concluded just as it began with Cavalieri in 1st, Phend in 2nd, and Tollard in 3rd. It would go down to A3 to crown the overall champ!

A3 rolled around and it was still very undecided who would take the overall. The tone went off and everyone was on edge. Cavalieri led the way one final time as the drivers behind him brought the pressure. Phend was able to pass Cavalieri and take over the lead by lap 10. Tollard was still running 3rd waiting to make a move. He knew something had to happen if he wanted his chance at winning. His opportunity came and he got by into 2nd, 4 laps later. Aydin Horne was driving well making his way into 3rd. The race concluded with Phend in 1st, Tollard in 2nd, and Horne in 3rd.

A1 was uneventful for Dakotah Phend as he maintained the lead right off the starting grid. Ryan Maifield was running 2nd, battling with Broc Champlin until he had an unfortunate break around lap 8. Champlin took over 2nd and Aydin Horne was coming for him in 3rd. The two ran close together for most of the race until the final two laps when Champlin had a bobble and Horne got by into 2nd. The race concluded with Phend in 1st, Horne in 2nd, and Champlin in 3rd.

Out of the gate in A2, Maifield made an early pass into the lead. Phend was running 2nd and Champlin was in 3rd. Tollard was in 4th, patiently waiting to move back into the top 3. Almost halfway through the race, Maifield had a bobble and Phend took back the lead. Champlin moved into 2nd and Tollard into 3rd.  From there they cruised to the final tone and finished in those positions. With two wins Phend officially had the overall title!

A3 was all about those final two coveted podium spots. Ryan Maifield led the way until Tollard was able to make a pass a few laps in. Tollard was trying to have a flawless run in hopes of adding a win under his belt in 4wd (which his consistency rate ended up being 99.10%). Champlin was in 2nd, battling with Aydin Horne who was in 3rd. Horne had a 2 and so did Champlin. Champlin was driving confidently giving it everything he had. With 3 laps to go, Champlin got a little squirmy and Horne took over 2nd. Tollard finished 1st, Horne 2nd, and Champlin 3rd. Overall, Tollard and Horne were tied for 2nd with 4 points each. Tollard had the faster laps and time giving him that 2nd place finish.

Overall, the event was a huge success with 247 entries and a flawless program! We really enjoyed visiting SDRC and can’t wait to be back for the ROAR 1:10 Off-Road Nationals later this year. A big thank you to Sean Story and his crew for hosting a phenomenal event along with all the drivers that came out to race! Up next in the INS12 series is the Spring Indoor Nationals at Adrenaline RC Raceway! In the meantime, we’re gearing up for the Dirt Nitro Challenge at the end of the month! 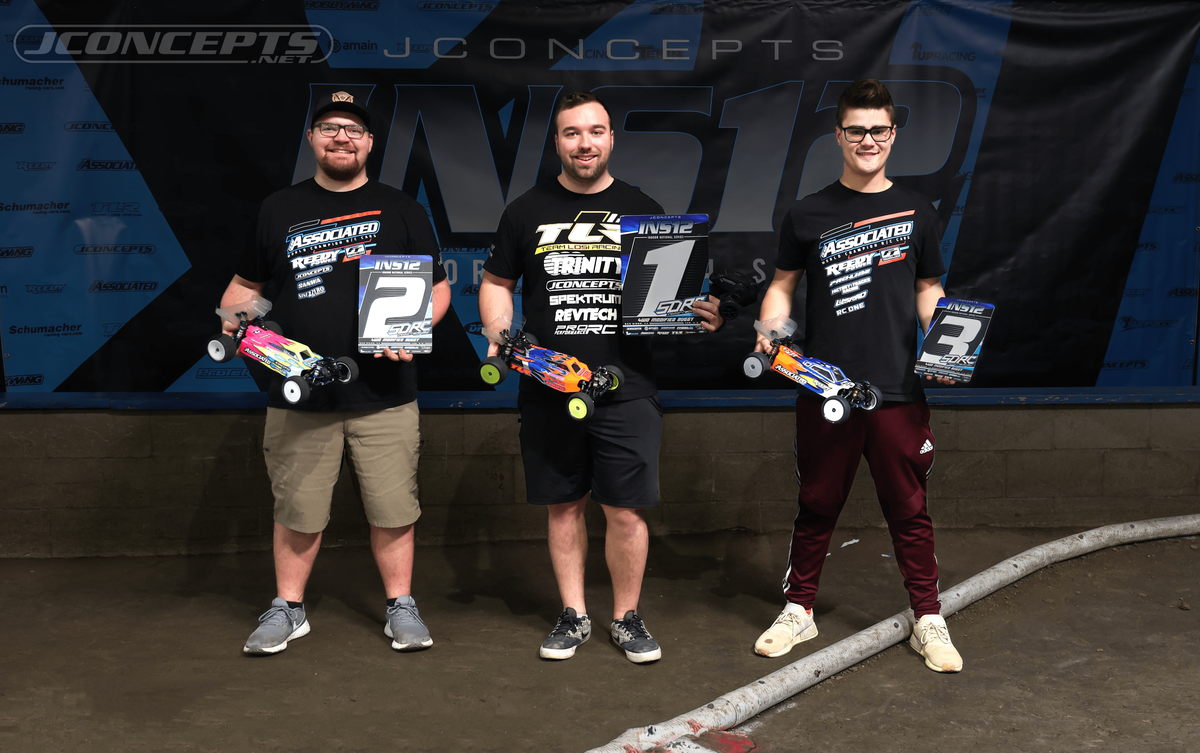 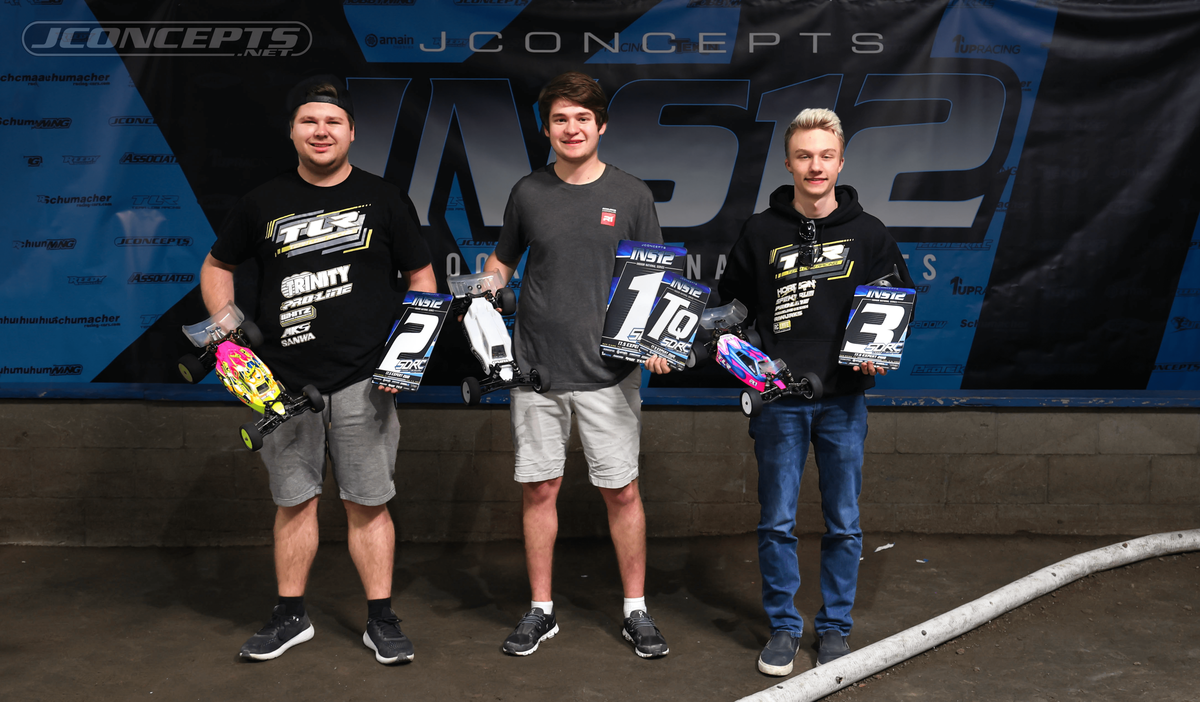 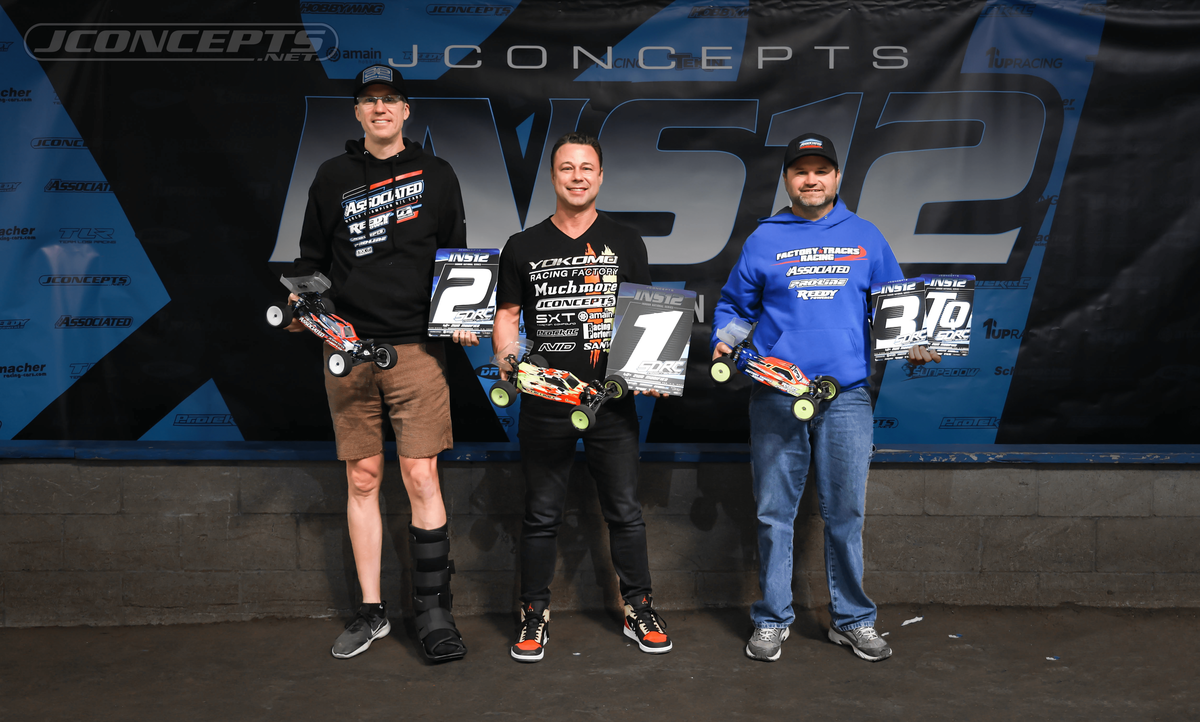 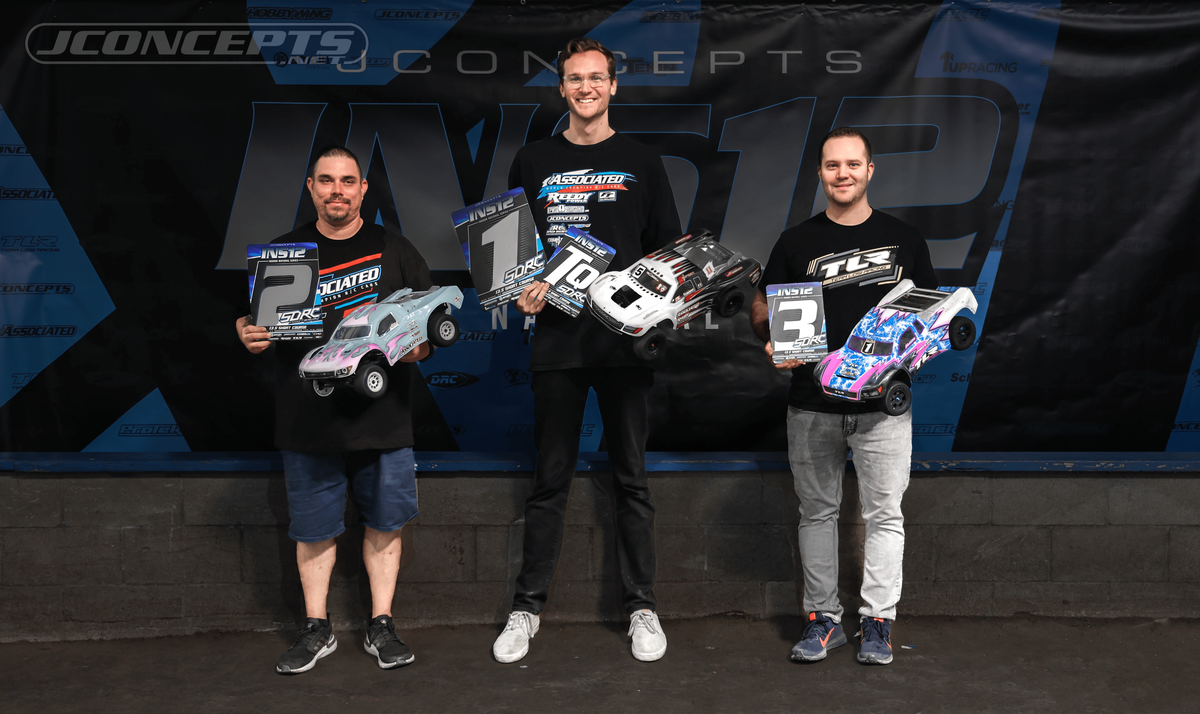 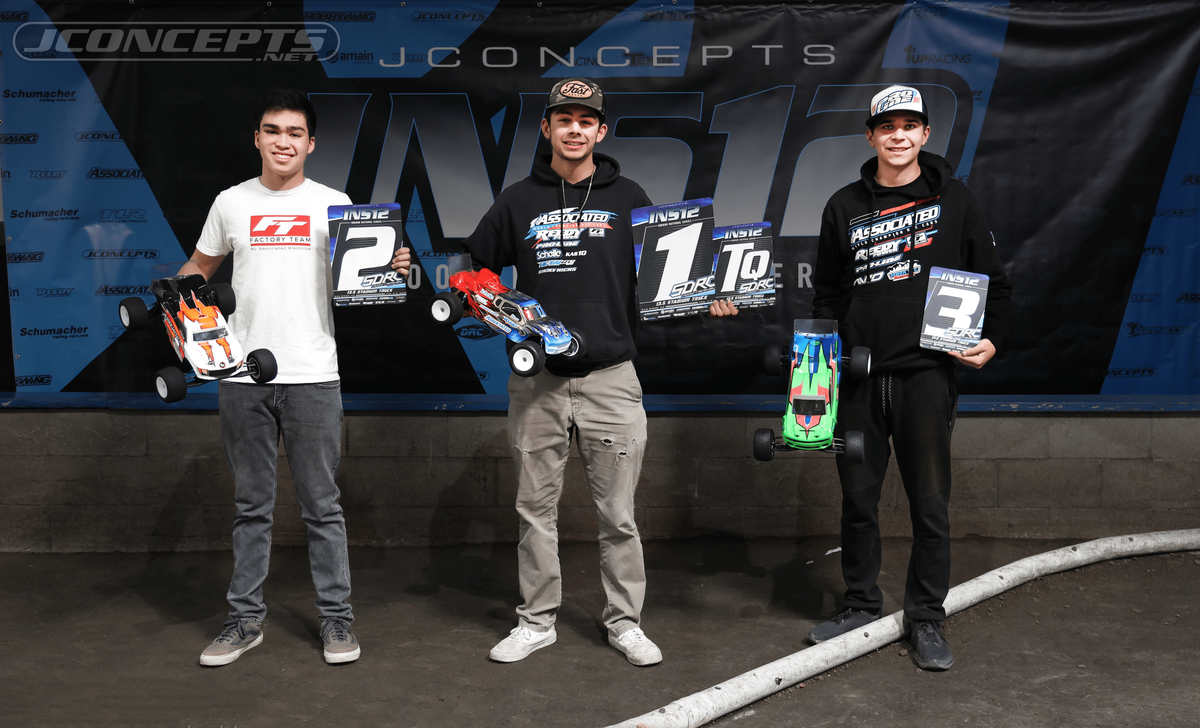 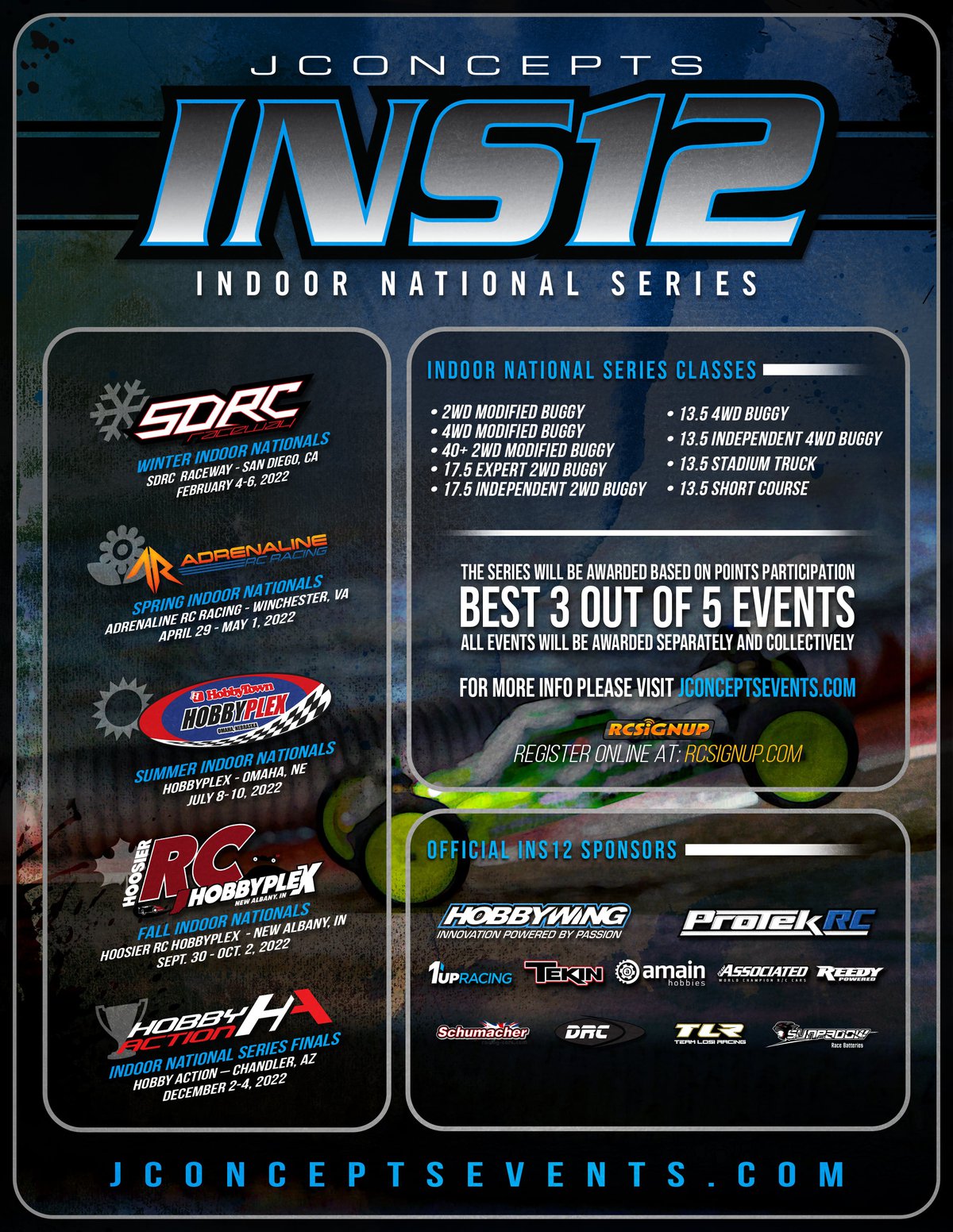