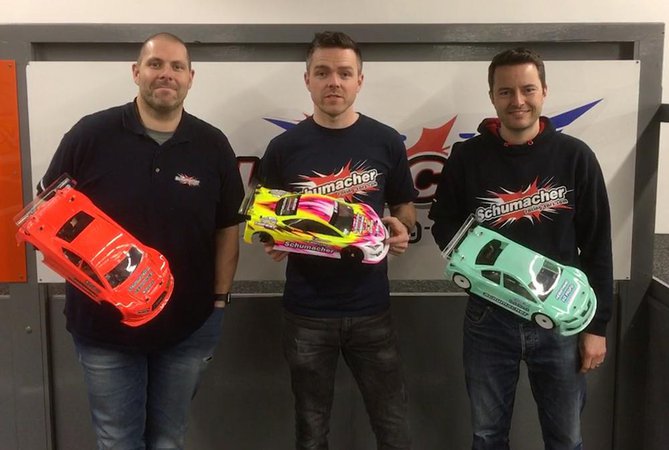 A full entry of racers to the maximum capacity MB can hold split between GT12 and Touring cars.  GT12 would run on Contact green stripe control tyres and Touring on Sorex 28RK's ensuring a level playing field for all the drivers.  The crew at MB had put down an excellent design track which enable close and fast racing.

In Touring cars Schumacher's top man Olly Jefferies was a class above all day, he led the way with a TQ and comfortable victory.  Marcus Askell and Schumacher's  Chris Ashton would battle out for the second and third spots both of course running Mi6evo's.  It was Marcus who came out on top in the final by just .184 of a second.  A big shout out to youngster Morgan Thompson who had a great run to 4th from 5th on the grid.

The A final result was;

In the GT12 class the racing was super close, helped by all the drivers running the same Contact control tyres.  Schumacher's Andy Murray was the class of the field taking 3 of the 4 qualifying rounds.  Not too far behind was Adam Mackman with his Atom with Nathan Goodban lining up third on the grid.  The A final was very close with Andy just heading out Adam by over a second with Ben Elliott making up 1 spot claiming 3rd on the podium and an important Chocolate prize for the ride home!

The A final result was;

Videos of every final can be found here -
https://www.youtube.com/playlist?list=PL5GYEVW7-wgp8z2Chkdj_81J15sjvnCnr
(Thanks to Kenneth Rogers)

One again an excellent fun meeting with some super close racing, thank you to the drivers for attending and the MB crew for the facilities.

The Schumacher GP at MB Models Round 3 is on the 20th April, entries available on www.centralbooking.org 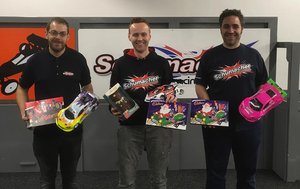