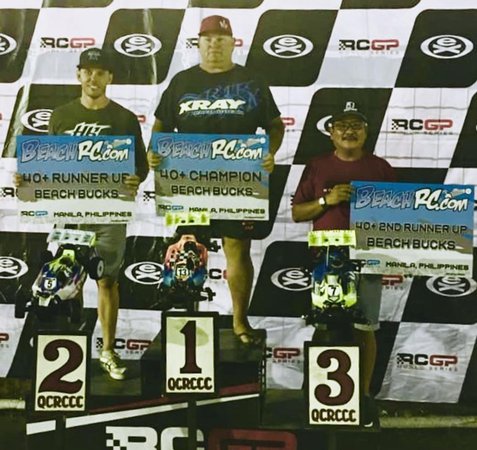 The first round of the brand new RCGP World Series was held in Manila, Philippines. This three round series is for 1/8 gas powered buggies, many of the world’s best drivers are competing in the RC1 category. Along with the RCGP drivers they also ran the RC2 class which was for everyone else to be able to race in.

Upon arrival at the Circulo Verde Race Track we went straight to a track walk. Wow, what an amazing track to run on. It had been packed hard then covered with molasses so it was very different to what we are used to running here in New Zealand. The temperatures were also a lot hotter, in the mid to high 30’s (Celsius) everyday. I am running the FX 302 engine in the XB8 2019 buggy, and boy what a package that is. I tuned the FX engine on Thursday and it did not need to be touched at all for the rest of the weekend. So a good strong and reliable engine gave me plenty of confidence to push hard.

Thursday, day 1 was the official practice day and it was great to finally get on track after all the prep and waiting.  Harder sway bars 2.4 front and 2.8 rear, diffs 10-15-5 and I was into it. They ran 5 rounds of controlled practice and early on in round one I found it a bit hard to see the race line with the drivers stand being so tall. The XB8 felt very nice from the get go and started stringing good laps together. After the 5 rounds I was sitting 25th overall but it was only practice.

Friday we did one more practice before going into 3 rounds of seeding races and after that we would be reseeded in fastest-slowest heats for qualifying.

I made it into the top heat for qualifying, and with that I also changed my shock package as the temps were up a bit. I was running the 8 hole 1.2’s but went back to the 6 hole with 2 rebound hole flap pistons. That made a huge difference to the laps times and how hard I could push. After qualifying 1-2 I was sitting 11th overall from 80 drivers. After Q3 I went to 9th so the results were getting better.

The car felt fantastic over the big jumps and also felt very stable through the high traction corners. On Saturday they also ran the 40+ class which I qualified for. I started from 11th and was lucky to be able to get through to 3rd after the first lap and pushed hard to gain the lead just after the 4 minute mark. From there it was just push on and run clean laps till the end. My pitman was just keeping me calm over the radio link. I had pressure from second but I had enough to hold him off and take the win by around 5 seconds. So a great result there taking the 40+ title with the XB8’19 and FX package.

On Sunday I had to wait a long time as I had qualified direct to the semi, it was a tough race with some good laps and some bad. I was lucky to get inside the 5th place guy. It went down to the last triple on the last lap. I could have taken the last transfer spot but got hit from behind and tipped upside down on the corner before the finish so ended 7th and had to go into the LCQ ( last chance qualifier )

There is only 1 person that transfers into the A main from the LCQ and I was fortunate enough to be starting on P1. At the start of the race I got a clean get away and once again the XB8 and FX package was running perfectly. I was able to run from start to finish to take the chequered flag and the final spot in the A main.

With very little time to do anything to the car it was straight into the A main off P13. I had a good start and got through to about mid pack early in the 45 min A main. Yet again my pitman was just telling me to keep calm and do the laps with no crashes. That was working great as I had moved up into P3 after about 5 mins and maintained that for a fair few laps. We were also running 10 minute stops as I had been getting 11 min tanks all weekend. After stop 2 it was clear the air temps had dropped, the filter was starting to block a bit and fuel mileage was starting to drop. My 2 pit men (Mark Johnston and Bevan Burney) had my stops down perfectly and everything was going well. Unfortunately I made a few errors mid race and I dropped back a few spots. Thankfully I was able to make a couple back up before the race was done and ended up 5th in the first every RCGP World Series RC2 class in Manila, which used to be known as the Philippines Masters. 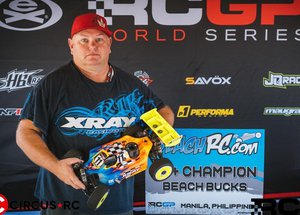