In Modified class, it was Xray driver Gary Huang become top seed after CP, followed by Nicholas Lee and Serpent driver Rocket Zhang. In the 5 rounds of exciting battle in qualifiers, Nico driving his new Yokomo BD9 took the overall TQ with a record breaking 23 laps in Q5. Huang and his Xray teammate Vincent Tse got 2nd and 3rd spot on the starting grid in finals. In the 3 mains, Nicholas kept his good form and took full advantage of his pole position, led the race from tone to tone in both leg1 and leg2. Gary Huang had to settle for 2nd and Yokomo driver Fong King took the last podium spot in Modified class.

In Stock class, Mugen driver Yan Cheung dominate the race, took TQ and A1. But the battle was much closer than the results showed, Awesomatix driver Simon Wang raced with Yan Cheung till the last lap and missed the Champion spot by only 0.4 sec behind. Hong Kong driver Lai Yiu Man took 3rd place.

In the special TLAB Stock class, all drivers were using controlled DASH TLAB ESC. Serpent driver Stick King got the TQ honour and brought home the champion trophy, with Huang Yong Xiang in 2nd and Zero in 3rd. 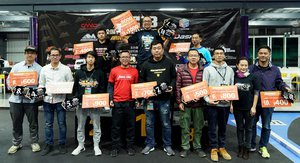 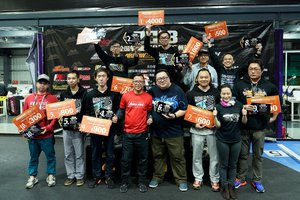