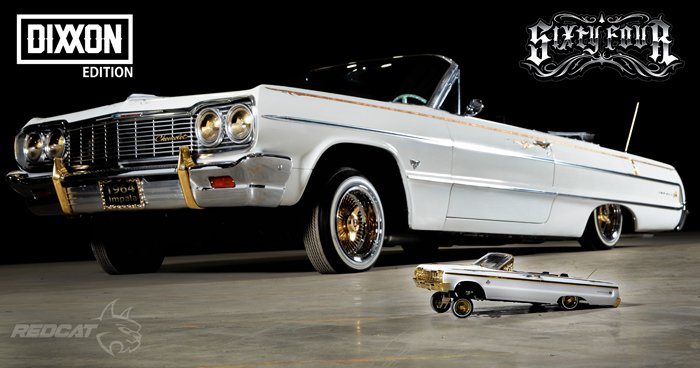 In late 2020 Redcat shocked the RC industry with the very first mass-produced ready-to-run hobby grade RC hopping lowrider, the SixtyFour. Since its release, the SixtyFour has exploded in popularity among RC hobbyists as well as full-scale lowrider communities. Because of its success, a fellow Arizona-based business, DIXXON Flannel Co., has taken an interest.

Danny Dreyer, the owner of DIXXON, said “We're really impressed with the SixtyFour and the work the Redcat team has put into it. I own a 1964 Impala I call 'La Guera', and the DIXXON Edition SixtyFour looks and moves like the real thing. It’s been a fun project to collaborate on, and the end result is exactly what we wanted.” Dreyer grew up around motorcycles and skateboards and is also a huge fan of lowriders. In 2022, DIXXON was the primary sponsor of the AZ Lowrider SuperShow, and Dreyer is proud of DIXXON's involvement in the lowrider scene. “It was amazing to see how the people in the lowrider community were being creative with these 1:10 scale replicas. They were customizing them to look like their own rides, even rides they had let go of over the years." Dreyer said.

DIXXON is well known for its high-quality flannel shirts that fit well, feel good, and don’t shrink in the wash. “When Danny and I talked about possibly collaborating on a limited edition SixtyFour, we were both excited,” F.C. Brigham, a Redcat executive, said. "Danny wanted us to create a SixtyFour that looked like his personal lowrider, so that’s exactly what we did." Brigham went on to say, "We enjoy working with others; it allows us to share our passion for RC as well as full-size vehicles. We hope to consider more collaborations with DIXXON and other businesses in the future."

The stunning details of Danny Dreyer’s full-size 1964 Chevrolet Impala SS convertible have been re-created in this DIXXON Edition SixtyFour. The open-top body showcases the custom detailed black and gold interior. The Impala SS badging adorns both the interior and exterior of this beautiful lowrider. Injection-molded plastic parts are used to create the body’s gold-plated accessories with optional LED lights available for nighttime cruising.

The LR6X six-channel 2.4GHz radio system, fitted specifically for RC lowriders, includes many buttons, levers, and switches to drive the SixtyFour and perform realistic hopping and lowrider tricks. Individual switches control each of the three height adjustment servos, momentary switches raise the front or rear of the vehicle to maximum ride height/hopping, and momentary buttons lower the front or rear of the vehicle to minimum ride height. The levers and switches are similar to those found on a full-size hopper control unit, providing an authentic hopping lowrider experience. 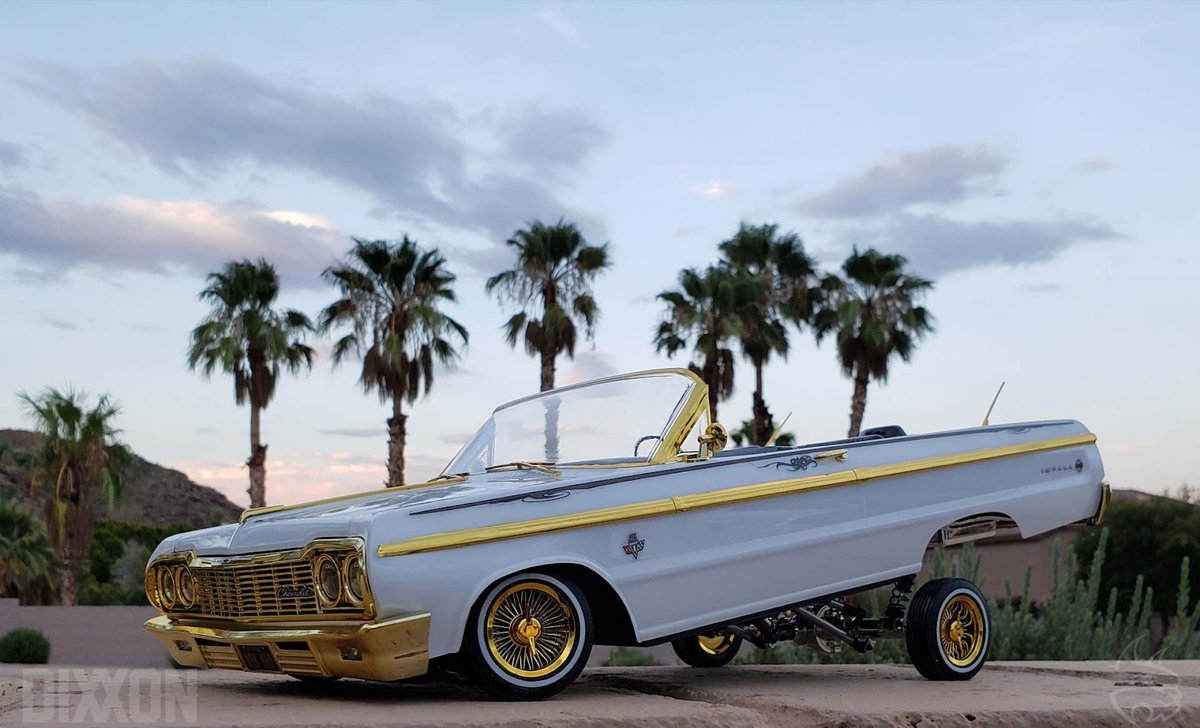