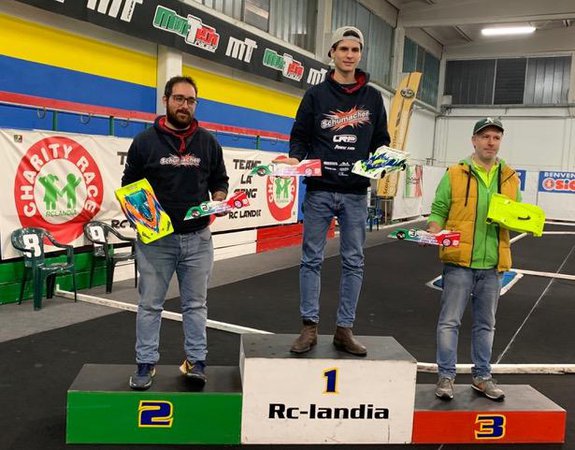 The second round of the ONE12 Series 2019/20 took place in RC Landia (Scandiano - Italy) this past weekend. The venue assured great racing conditions and the perfect setup for robust attendance in both GT12 and LMP Open Modified. The race was also enriched by the presence of Team Schumacher’s top drivers, who chose the Italian race as one of their preparation stages for the IFMAR 1/12 World Championships to be held in early January 2020 in UK.

In LMP Open Modified, Michal Orlowski (Team Schumacher) delivered an impressive Grand Chelem taking TQ, the overall race win and the official lap record of RC Landia track with 10.738 seconds.
During the morning qualifying, Michal displayed great consistency in all three runs ahead of Jörn Neumann (Team Schumacher) who was the only other driver capable of printing fast lap times below the 11-second barrier. Good third on the grid, and ONE12 Series current leader in the class, Alessio Mota (Team Schumacher).
In the afternoon finals, Orlowski’s driving was flawless and with back to back 43-lap runs he was able to clinch the overall victory ahead of Mota and Marcello Galli (Team La Gang).
Marco Mecugni took the B final.
In GT12, Nathanael Goodban (Team Schumacher) carried the momentum from his recent win at Round 2 of the BRCA GT12 Nationals setting the pace in the class together with Guido Carbognani (Team La Gang) who, during qualifying, was a close second and, together with Goodban, the only driver registering a 26-lap run. Third on the grid for the finals, Alessandro Rampini (Treerremodellismo).
During the afternoon finals, Nathanael checked out early in both A1 and A2 securing the overall win with impressive pace which was ultimately worth the only 27-lap run registered during the day. Guido was a solid second ahead of Alessandro Rampini, with the two now sharing the lead spot in the overall ranking of the ONE12 Series 2019/20.
The B-final went to Massimo Imovilli (Team La Gang).
Special mention to 6-year old Alberto Rossetti (Minicar Fontanellato) who displayed amazing skills in driving his car to the C-final win. 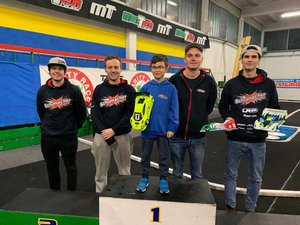 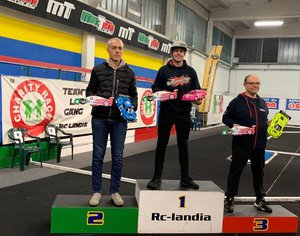