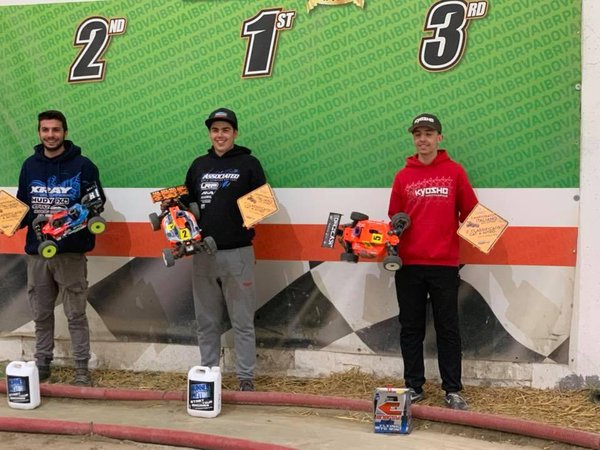 This week there was the first round of Aci Italian Championship in IBR Padova!

On Friday the track was open for free practice all day and both cars worked from the beginning, the only problem was to choose the right tires because the track was very dusty and bumpy.

For the setup my base setup was super good for the whole the race. On Saturday we made the reeseding and I was first in e-buggy and 2nd in nitro class behind Berton. In the afternoon we made 2 qualies and I took overnight TQ in e-buggy and second in nitro.

For the last day we decided to put thin swaybars in nitro and I used 2.3 in front and 2.5 in rear and car was better. After qualies I was 1st in e-buggy and 3rd in nitro.

In e-buggy I won A1 and A2 after some nice battles with Berton and took the overall win.

During the first 15 minutes of the nitro final I did some stupid mistakes and lost a lot of time and I was more than 30 seconds behind Davide but after half final my car was amazing and I finished 2nd!