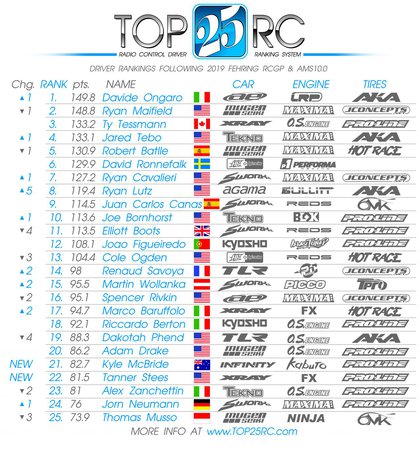 The RCGP at Fehring and the AMS 10.0 both counted toward the Top 25 RC world driver rankings. For the RCGP it was Davide Ongaro that continues to be unbeatable by taking the win both days, which pushed him up to the New #1 ranked driver. For The AMS it was Ryan Lutz who took the win, which resulted in a big jump in his ranking because he also had a poor result move to his older results. There are some notable performances to talk about at both events. At the RCGP it was Marco Baruffolo who had a great showing and gave Ongaro everything he could handle throughout the event. At the AMS 10.0 it was Jared Tebo who qualified in the B main and kept his head down to bump up to the final and finished on the podium with 3rd. Also a great showing from Spencer Heckert who finished 4th and has been putting in great results lately (look out for him to climb the ranks in the future) go to top25rc.com for 1-50 rankings and how it works. 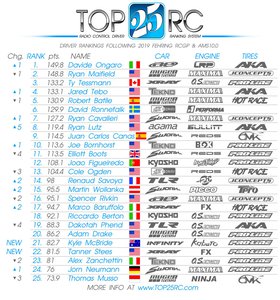