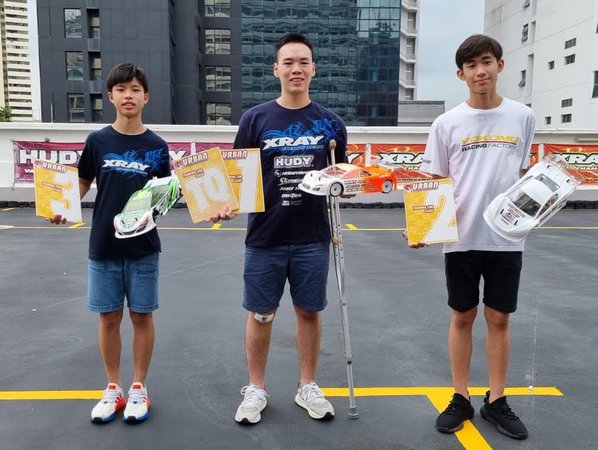 The second round of the Urban Touring Series was held at UrbanRC in downtown Singapore. With recent changes to the facilities operating hours, with the track now only open on the weekends, racers had to manage with only 1 day of practice on Saturday before the race on Sunday. Due to less running on the track during the week, traction levels were increasing throughout the event, making it an interesting challenge to see who could best adapt to the ever-changing conditions. This time, only the premier 17.5 blindly touring class was in action.

Reigning series champion and winner of round 1, XRAY factory driver Dominic Quek set the pace early on, claiming the first 2 rounds of qualifying to wrap up an early TQ, before taking start-to-finish wins in the first 2 legs of the A-mains to secure the overall win for the day and extend his championship lead.

Behind him, it was an extremely tough fight to make the 8-car A-main. XRAY Singapore drivers Esmail Apandi and Zaccheus Lam showed great pace but had their progress hampered during qualifying with misfortunes, ending up 4th and 6th respectively after qualifying. With only 6 cars qualifying directly into the A-main with 2 bump-ups from the B-main, local privateer Eric Choo once again bumped up into the A-main with his X4, marking his second consecutive A-main appearance in this highly competitive field.

There was battles throughout all 3 legs of the A finals which resulted in mixed fortunes for our drivers. Zaccheus had great runs in A2 and A3 where he finished 3rd and 2nd respectively to seal an overall 3rd place for the event, marking his first podium finish of the season. Unfortunately, Esmail did not benefit from the same fortunes and dropped to 8th overall, while Eric finished 7th.