This years Stock Wars, under race promoter Robbie Dodge, were hosted at 180 Raceway presented by Awesomatix and saw drivers coming from the midwest as well as up and down the east coast.  180 Raceway, the fastest small track in the county, is home to multiple national champion drivers such as the race promoter Robbie Dodge, Craig Xaiver, and current Roar National Champion drivers Mike Gee and Sam Isaacs.  This event also was the 5th major event run using Can-Am RC Series rules.  Pro and Open Touring Car were both run with Can-Am stock motors.  The difference between the classes being, any driver qualifying for an A-Main event at a major race this calendar year had to run Pro, leaving the open class for up and coming drivers.
Friday would be open practice, followed by a seeding round.  While drivers continued to roll in from near and far, the track would see plenty of action as drivers adjusted to the Track Lyons, newly applied to this 80' x 34' bastion of speed.  Touring car, Pro and Open would be hot lapping at 8.2 and 8.4 seconds per lap respectively. USGT would be close behind running hotlaps at 8.5.
Like normal, Saturday's four rounds of qualifying saw speeds pick up a couple tenths. Because of the Can-Am fixed gears and rotating hand out motors things were tight across the board.  At the end of the day it was Awesomatix drivers Mike Gee (TQ) and Sam Isaacs (3rd) surrounding Xray driver Robbie Dodge (2nd) in Pro Touring.   In Open Touring it would be Awesomatix drivers Arvin Nano taking TQ with Basil Stylianuo 2nd, and Xray driver Dan Pawling 3rd.  USGT would see a clean sweep of the top 5 spots during qualifying with Danny Jenkins taking TQ over Clayton Young (2nd) and Manny Flores (3rd).
Sunday was main day bringing triple mains across the board.  With qualifying times tight it was definitely no picnic for most drivers. 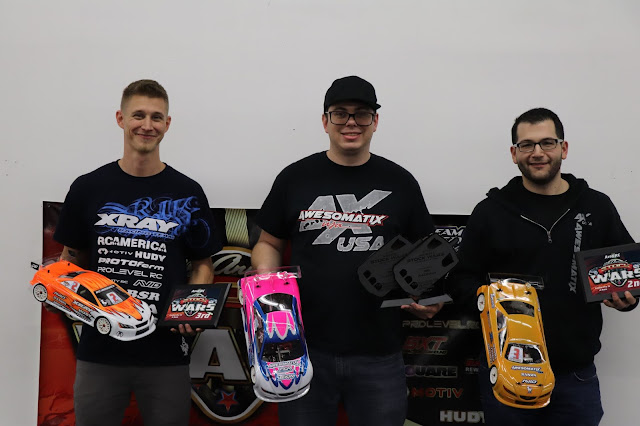 In Pro Touring, A1 would go to Awesomatix Mike Gee leading from beginning to end, but Sam Isaacs would be able to get around Robbie Dodge to take 2nd leaving Robbie to bring home third.  In A2 calamity would happen and the field would be completely unraveled when Mike tapped in the sweeper and caught a dot at sweeper exit starting a chain reaction of events.  A2 would see Robbie take the win with Awesomatix Craig Xaiver 2nd and Mike drive back up to 3rd.  It all came down to A3.  Both Mike and Robbie had one win a piece, so it was still anyone's title to win.  A3 went down much more calmly as Robbie was able to hold on the first minute to Mike's bumper, but then Mike slowly pulled away to the win.  Robbie ended up rolling late, giving 2nd to Sam, and coming home 3rd.  That would be the final result as well after tie breakers were sorted out. 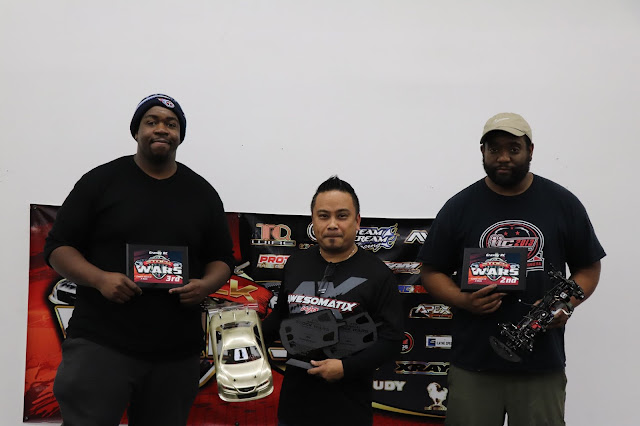 In Open Touring every race was an adventure.  A1 saw many mistakes with Awesomatix Basil Stylianuo capitalizing to take the win.  Jameson Reichard would come home 2nd with Awesomatix  Bryan Thomas 3rd.  A mains 2 and 3 were pretty much carbon copies of each other with the top three being Awesomatix Arvin Nano taking home the over all follow by Tom Kieser 2nd and Bryan 3rd. 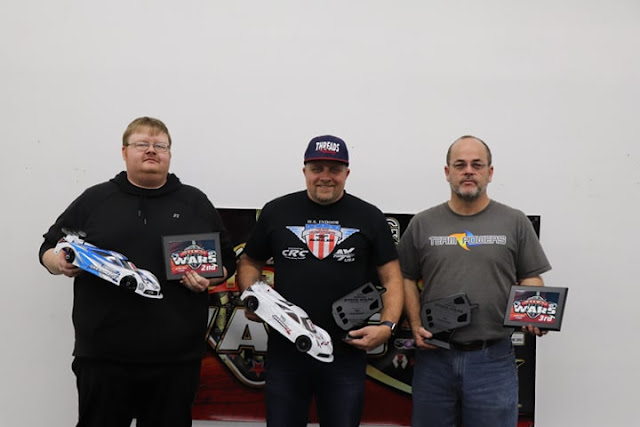 USGT would be the most calm of the touring car style mains. Awesomatix Clayton Young would take the win with Dustin Layne 2nd and Danny Jenkins 3rd.