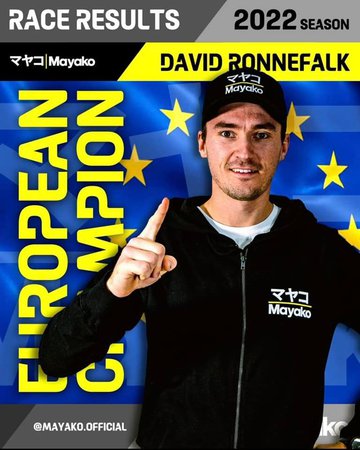 Wow, don’t really know what to say! This one is definitely a bit extra special in many ways..

After a switch of brands coming into this year I knew it was going to require lots of work to reach our goals set for this year. To be able to say that we now are European Champions for a 3rd time in the 1/8 Nitro class is just an amazing feeling!

I felt very comfortable from the start of the event. Conditions were as expected, a high grip track with no tire wear. Very much like the Euro Warmup so we were well prepared and had everything under control. Had really good speed early on in qualifying but a couple of mistakes didn’t give us the chance to challenge for the TQ. However I knew the pace was good and the perfect feeling wasn’t far away.

We kept making small little tweaks to find the sweetspot and for the finals day I felt very comfortable and especially focused. Semi practice was very good and from that point it was just a matter of putting in the drive that was needed to beat those guys out there

It’s been a while since I won my last European Championship in this class back in 2014. I felt it was about time after coming sooo close both in 2016 and 2019. I won my semi and would line up in 3rd on the grid behind Canas and Bruno.

They had better pace than me in the semi final but I knew the track would be slightly different late afternoon with cooler temperatures than in the semi. The warmup felt great, the car was feeling great, exactly how I wanted it. I had a good balance of grip and forgivness on the side which is the most important for me. Engine ran flawless and I knew we were going to have good fuel strategy.

Everything was falling into its place and the start went off. Canas, Bruno and myself pulled away and built up a small gap to the others. They were probably slightly quicker than me out of the gate, but as I got my good start and got into the rythm I really started to click off consistently fast lap times. We were very close to each other for the first half of the race and all of us were pushing to the absolute maximum. When Bruno made a mistake and Canas fuel strategy started to give me the upper hand, all I did was starting to pace myself against them chasing me.

I got a 10sec lead and at this point there was no way I was going to give it away. I kept pushing as hard as I could without taking any risks. I had a great flow and was able to control the gap for the last 15min. I drove the main of my life, I would honestly rank it higher than Vegas in 2016 just because of the speed and intensity this track had. The amount of focus you had to have was insane and to do 45min without needing marshal on that track against the best is something I will take with me and I’m very proud of!!!

So happy and proud of everyone around me giving me the support needed to be able to create memories like this! However this is just the beginning of my new venture and we won’t stop here. We will keep griniding for what’s to come in September and make sure we are fully prepared for it!

There are many I’d like to thank with this win

First of all to Mayako and JQ for believing in my abilities and giving me the opportunity to be the ambassador for the new brand. We have been hard at work since day 1 and I think you have seen my passion and will to succeed! This is just the beginning guys, let’s keep pushing!! #mayakomovement

To Adrien, Oscar and everyone behind Corsatec. I know lots of you out there are eager to get your hands on the products, I can tell you the wait will be worth it and it’s not going to be too long now
#CTN7

To Highest RC for providing me with the best servos giving me the right feeling to control my car on track!
#B210

To Arrowmax for the finest wrenches and setup tools making sure all my toe/camber angles are correct!
#blackgolden

To XTR for giving me the best shock/diff fluids with consistent handling throughout long mains in tough conditions like this with warm weather and high grip levels. #DREditionOils

To Matteo at Runner Time fuels for giving me the best fuel for power and run time! Together with the Corsatec engine we were one of few going long in the mains
#startyourengines

To Nicola at HotRace tires for his support, passion and work ethic. I don’t know many people as hard working as this guy and it shows, grazie mille!
#Sahara

To dad for being part of the dream team together with Adrien down in the pits and making sure everything is alright during the race! You both were unmatched in the main allowing me to overtake Canas with an overcut
#dreamteam

To all my other sponsors for making my dreams come true. You are all contributing to this success in one way or another and I couldn’t do it without you guys!
#thebest

To the organisers of this race. José Figueiredo and his crew hit this one out of the park and hosted the best Euros I’ve ever been to. I have nothing else than amazing things to say about the facility you guys have created. Cudos to everyone being part of the organisation, I’m sure it wasn’t the last time we will be here. No matter what I will always have this great memory with me!
#obrigado

Last but not least I want to give a special shout out to my girlfriend and family back home watching me drive, texting me and cheering me on all the week! You are truly the best

Over and out for this time, but we will be back in full swing soon again