Talk It Up Tuesday: Broc Champlin 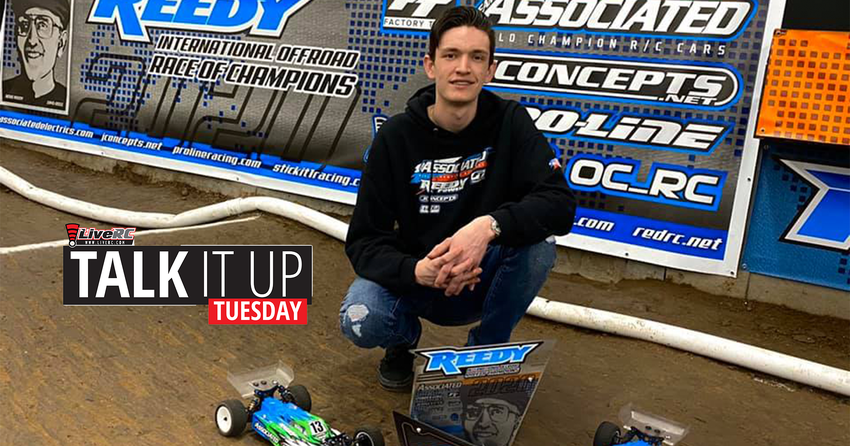 Broc Champlin had a fairly busy social media week leaving the Team Associated team and moving over to Schumacher, we caught up with him to get all the details. #TalkItUpTuesday

LiveRC: By the time this comes out on Tuesday it will be announced that you will be running Schumacher. How did that come about and how do you feel about it?
Broc Champlin: Yeah, so as shown now, I've made the transfer to Schumacher. All of the guys over there have been super easy to work with. We spoke last year before I continued forward and signed with AE and it was only a matter of time. Such an amazing group of guys over in the U.K. and I'm excited to be partnered with them and ready to showcase just how good the cars are here in the states. Obviously they are magnificent on carpet but the program is also phenomenal on dirt!

LRC: As you explained in your post, you bought yourself out of your contract with Associated and Reedy, was it purely a disagreement on what you felt you were worth monetarily or were there other factors?
BC: Being completely honest, worth was only a small portion. Obviously the results from the last year and a half have shown that it had to have been a part. I was paid by AE but nothing like I should've been or could've been. The main factor in my decision was support. I didn't feel I was getting the support I needed and especially within 1/8th scale. That's in large part as to why I didn't run nitro this last year besides @ DNC. I felt kicked to the curb. Surf City was miserable because of it. I didn't ask for much and still didn't receive anything. Another big factor was team comradery. Very toxic. And lastly, I had issues with specific products that weren't being fixed and they wouldn't take any of my input to make it better. Overall, I just didn't feel it was in my best interest to continue the term with AE so I bought myself out. I wish them the best in the future as many of those guys over at AE became family with time. I'm very excited for this new opportunity!

LRC: Your brother Blake has stayed with the Team Associated squad and is putting up some impressive results at the last few races, has this put a strain on your relationship?
BC: I think we're on the same page. He's happy where he's at, I'm beyond happy with my new program. All is good and it just adds a little more spice to club racing and what not!

LRC: Do you plan on racing on dirt as well as carpet this year? Any 1/8th scale?
BC: I will be racing both dirt and carpet. The Schumacher team put on a great performance at worlds in Slovakia last year so I know the cars are also fabulous when it comes to dirt racing as that was a very loose track. For 1/8th, finalizing everything and I've done a bit of testing now as well.

LRC: How is Mercedes ownership life?
BC: It's fantastic haha. I just got a new AMG C 43 Performance 3 and I'm in love with it. If I could, I'd race real cars. lol

LRC: I would assume you’re still in High-school,  are you taking classes online or what is your program?
BC: I actually graduated high school almost a year ago! No plans for college just yet. Someday I'll probably go back to study psychology and work in the therapy field.

LRC: Is there anyone you would like to thank?
BC: I would like to thank everyone for the smooth transition into the new year. Thank you Shane and Alex at Reds. Kenny Johnson, the team manager from MKS and Reds! Mark, Robin and Trish from Schumacher. Clu Connors over at Whitz Racing Products and Jason Rouna from Jconcepts. I'm super excited for 2021 and beyond. I am now a part of some great teams with incredible products. Lets see what we can make happen!!