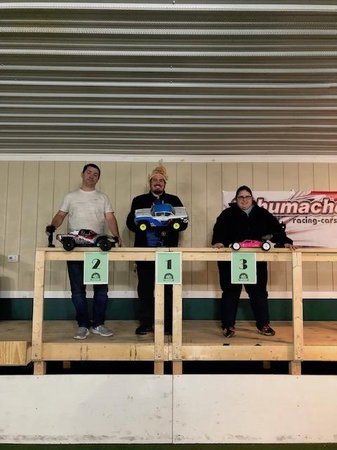 Wow what a Black Friday shootout! Super close racing with lots of overalls going to tie breakers and mains being decided by thousandths of seconds. Record 51 entries and lots of fun had by all. We learned that double mains makes for a really long night race so we won’t be doing that again anytime soon, but not to worry we will still throw double mains into the program on occasion.

Now on to the racing! Novice was a good battle between newcomer Joe Shepps and Matt Snell, each grabbing a main win. With Matt Snell getting the tie breaker for the overall win. Jack Steele ran away with both main wins in Intermediate spec with the rest of the field fighting for second. Rich Clark grabbed the runner up spot with Paul Korick taking third. Open truck was a wild ride with the stadium trucks proving to be a little faster but the short course trucks holding their ground around the track. Paul’s consistency grabbed him the overall with Chris Kiely showing the outright speed but taking second. Mark Baldwin held onto the third place overall over the rest of the field. 4wd buggy was Dominated by Matt Hougentoglers consistency with two second places he was able to grab the overall. Myself and Josh Smeltzer both grabbed a main win but we were unable to keep it together and take down Hougentogler. 2wd buggy was the big class and the panini press was on the line! Colin Morse III was on fire and proved consistency takes home the sandwich maker. Thomas Kauffman and Matt Hougentogler we’re both lightning fast but unable to take down Colin for the overall win. Rumor has it Colin is going to have some hungry racers on his doorstep waiting for a hot turkey panini.

Thanks to everyone that came and stuck it out for the long night. We’re learning and adapting our program to make it fun and exciting so stay tuned as we get settled into a consistent program for our points series. 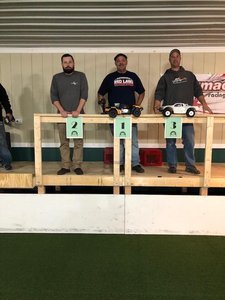 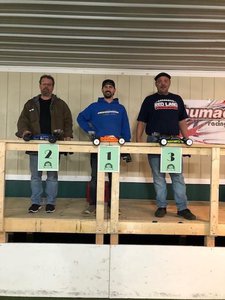 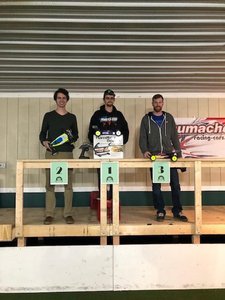 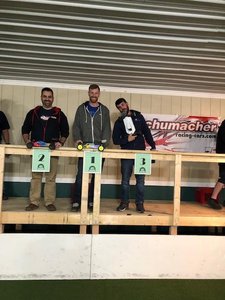