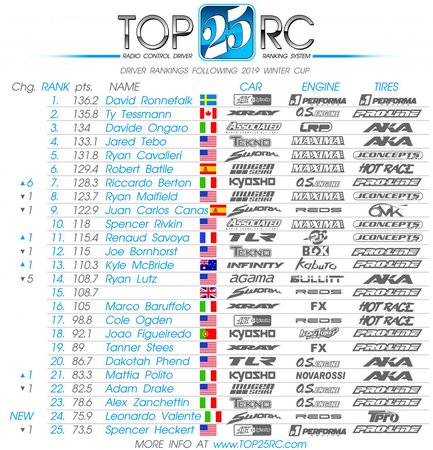 Marco Baruffolo takes the win at the 2019 Winter Cup at IBR Padova over the weekend. Riccardo Berton finished 2nd and Leonardo Valente rounded out the podium in 3rd. Lookout for Valente in the future he is another young talent for Italy and is a rising star.  We unfortunately have a driver that no longer wants their name used on the Top 25 RC ranking despite prompting their ranking in the past. After multiple explanations on how it works and going over his results, he still disagrees with his personal ranking and how it works. This is very unfortunate however we will respect this drivers request. That driver’s place in the rankings will be retained, however we will not use his name. The goal of Top 25 RC is to give drivers and companies free promotion and also be used as a tool to promote RC to the general public because people outside of RC can understand a universal world ranking. However each driver/company that celebrates the highs also need to accept the lows as far as the rankings/results go. for 1-50 rankings and how it works visit top25rc.com 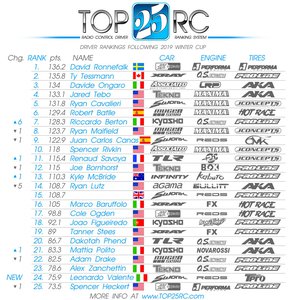