TALK IT UP TUESDAY: Photographer Steve Burgess of Rugspin Graphix 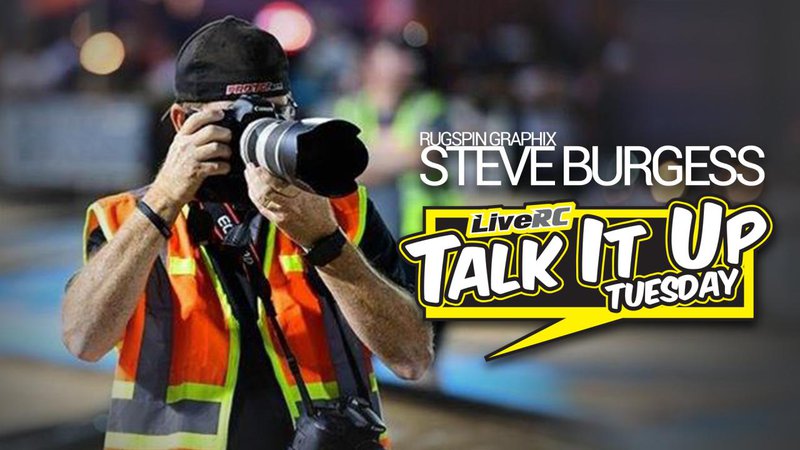 Whether you attend a major event, read the race report from it online, or simply scroll through social media during and shortly after the event, you are likely to see the photography work of Rugspin Graphix Steve Burgess.

We sit down with the "Rugspinner" for this week's Talk It Up Tuesday! 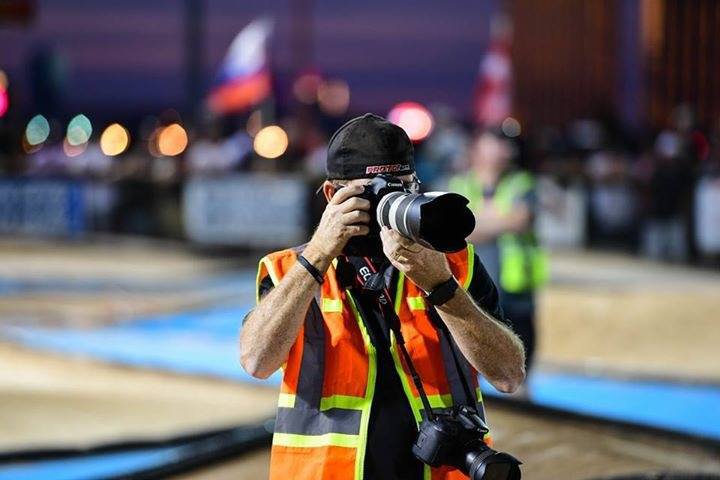 LRC: Steve Burgess of Rugspin Graphix, where shall we begin? Let’s start with when, where, how, and why you got started in R/C car racing in the first place?

Steve:  I had always had small RC cars growing up, you know the toys cars, the Radio Shack type cars but during my last year of High School in 1985 a friend went over to Japan and came back with a Tamiya Rough Rider after seeing it I started to check into RC and Found the Ranch Pit Shop in Pomona where I bought my first RC race car an RC10.  Shortly after we started racing in a back yard racing weekly with about 75 other guys here in the Palm Springs area.  I have raced just about everything Electric/Nitro 1/10th and 1/8th offroad   1/10th ,1/12th 1/8th Onroad with 1/12th being my favorite 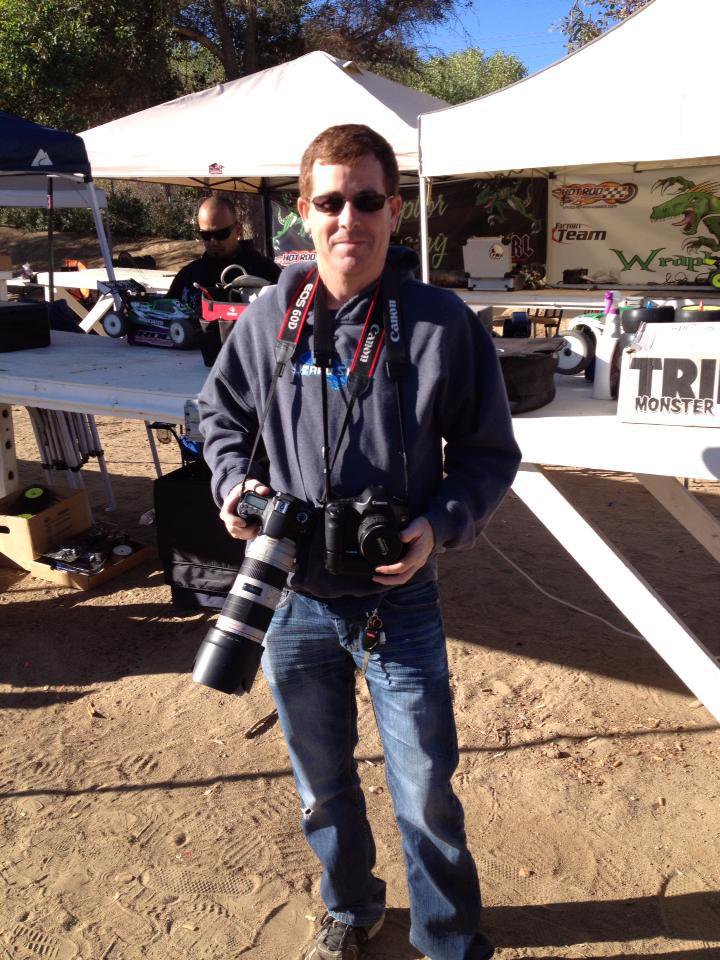 LRC: What do you consider as your biggest accomplishment as a racer over the years?

Steve: I think it was 1990 in 1/12th Onroad I Placed 2nd at the ROAR California State Champs right behind World Champion Tony Neisinger   and took 3rd the next year at the Nevada State Championships 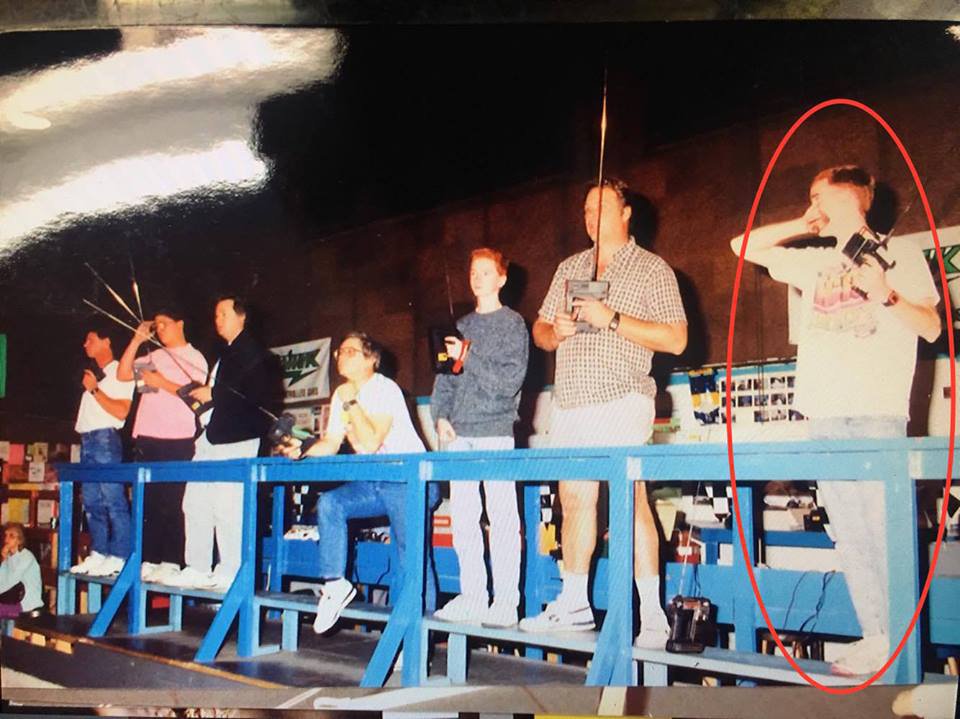 LRC: Off the race track you are a professional photographer with your own company Rugspin Graphix. Where did the name “Rugspin Graphix” come from?

Steve:  I started racing at "Bob & Jim's RC World" in Riverside in the late 80’s. The Race Director started calling me Teddy Ruxpin (You know that Stupid Talking Teddy Bear). Not sure why other than he gave lots of people nicknames. Well after a few months many thought he was saying Teddy Rugspin and it evolved into the rugspinner since we raced on carpet. When I started painting RC bodies and doing graphics work I needed a name and well Rugspinner or Rugspin came to mind. So "RUGSPIN GRAPHIX" was born. 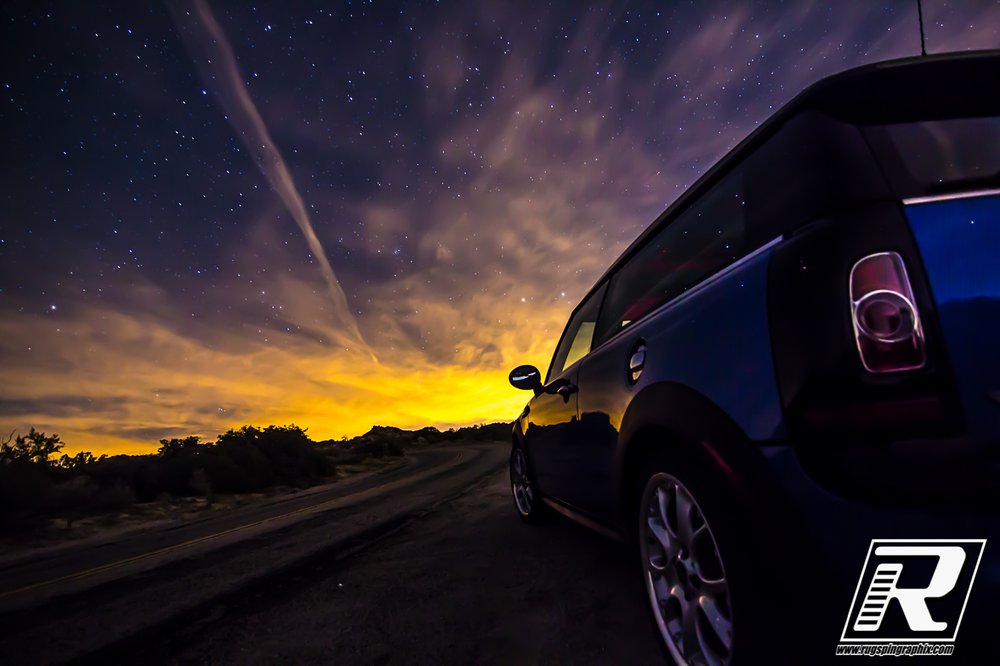 LRC: Rugspin is not limited to R/C cars correct? What other forms of photography are you involved in and/or enjoy doing?

Steve:  I love photography of all sorts and have shot lot’s of different stuff from Weddings to Concerts to Celestial events, I really enjoy candid’s when people don’t know your shooting them as it captures a real moment in time and is not staged or faked.

LRC: Over the past 4-5 years you have become known as one of the major “photo guys” in the industry and have been hired to do photo coverage of events ranging from trophy races in your home state of California to the IFMAR World Championships. What has been the most memorable race you have attended as a photographer, and why?

Steve:  Obviously the 1/8th Worlds in Vegas was awesome and a great experience, but I always enjoy the Reedy Touring Car Race of Champions at Tamiya every year.  To me it’s one of the most competitive races with the world’s best drivers on one of the most historical tracks in the USA.  In 2015 I got a shot of Tessmann hitting the famous kink and going Upside down over Cavalieri…I called it “Keeping up Foreign Relations” a little Top Gun reference.  To me it was cool to see 2 great offroad guys in the Onroad event. 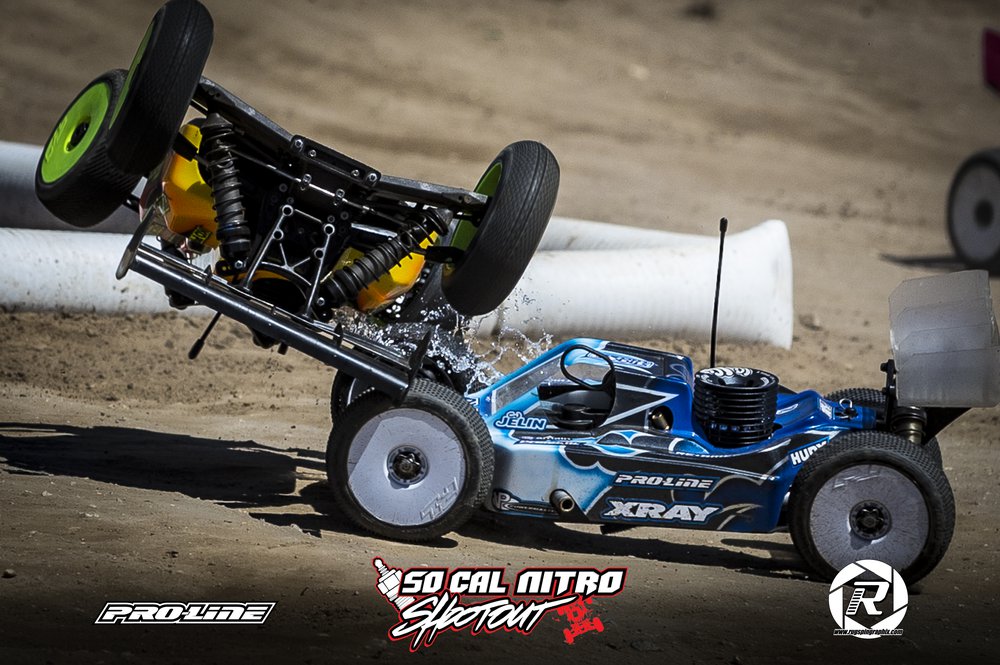 LRC: Is there a specific genre of R/C racing you prefer to shoot photos of the most? Why?

Steve:  I really love anything Onroad but 1/8th Offroad always makes for the best pictures because of the power and highflying action on the track with all the jumps and obstacles. 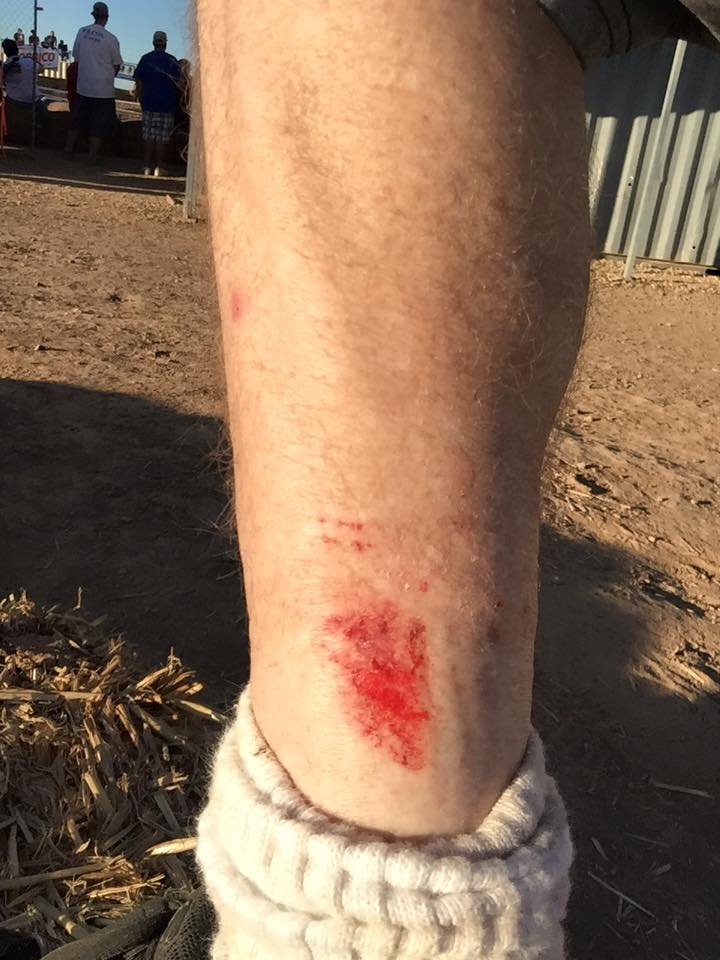 LRC: As photographers in our industry, you and your peers are constantly putting yourselves in the line of fire just to “get the shot”. How many times have you been hit, knocked down, etc. by an R/C car while searching for that perfect shot?

Steve:  I have been hit more times than I can count.. Slipped and fallen a lot, but one year at the Nitro Challenge I was walking along the back section and a truggy hit me full throttle. I kicked the car away although I wanted to throw him over the fence and he took off again on the track never to be seen again and I though it broke my ankle and it caused so much pain I almost puked.  After I sat for a while I was back on my feet shooting the race again.

LRC: What is your favorite and least favorite part about being an R/C photographer?

LRC: Who has the most photogenic car and driving style on the race track?

Steve:  Anyone with more than a 1 color paint scheme always gets my attention I feel if you put forth effort into making your car look good I’ll put forth effort into getting a great shot.  Nobody cares to see 10 different factory white cars. I also tend to concentrate more on the Sportsman and Intermediate drivers more than the pros, as they are the ones that support this sport and well most know what Maifield, Cav, Drake, lutz, etc car looks like.   I have always Liked Cody Kings paint as its stands out well amongst everyone.   Driving style?  If it has and motor and goes fast I’m all about it but 1/8th scale offroad outdoors just makes for the most exciting pics…

LRC: Talk to us a little bit about Silver State. You did some photo coverage from this year’s event and had quite a roller coaster of a week in Vegas.

Steve:  Well it started off well I got to the track and dropped off some of my stuff and checked into my hotel..( I stayed at another location ) but then it turned bad when I came out the next morning and got in the car and started it up. It was loud inside like I left a window open.  Well I didn’t but some guy decided to remove it for me taking some gear that was left covered in the back. I didn’t loose my cameras but did loose a large amount of support gear that I had in a few bags…  This included a Macbook, a couple of iPads, GoPro, Microphones, Flashes, photo paper, and other misc stuff all in toll around 8K to replace…  I am mad at myself that I gave someone the opportunity to break into my car.  This must happen way too often as the police wouldn’t even take a report but they will call in 7 to 10 days to do so after first reporting it..  All I can say is lesson learned and I wont make the same mistake twice.  The event itself was insane and super cool with the 2 tracks and even though that day I wasn’t in the best mood my RC family came around me and supported me in anyway they could offering any help they could to keep me up and rolling though the weekend and turned a bad day into good day. 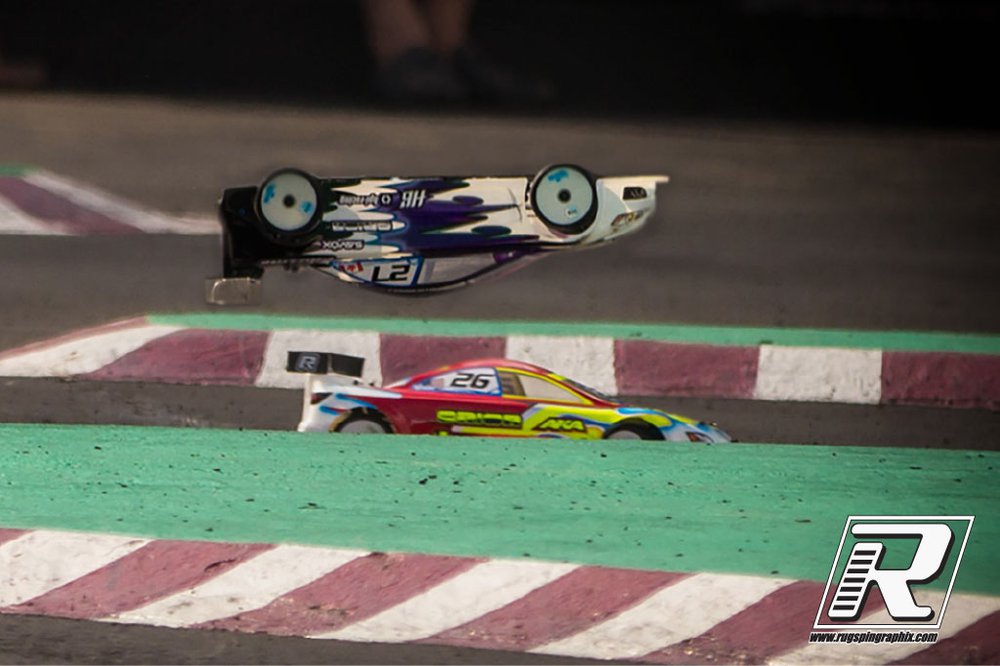 LRC: Often people attribute good photos to simply having expensive equipment. While quality equipment is important, it takes a tremendous amount of talent and skill behind the camera to get the shots – especially with the speed involved in R/C racing. What advice do you have for up and coming photographers that want to some day be in your shoes within in the R/C industry?

Steve:  I had a few guys give me some tips but for the most part it was lots of trial and error its digital and you can always delete.  You need to get low with the action not standing above, be at the car’s level even if you have to sit or lay on the ground.  Move with the car don’t just wait for it to come into frame.  All Camera’s are capable of getting good shots, you’ll take 100’s of shots and maybe only get a few keepers but that’s the challenge, Never give up because it’s that one picture that someone will go “WOW” that makes it all worth the effort.

LRC: What other events can we expect to see you at this year, and which are you looking forward to the most?

Steve:   I will be attending the Reedy Race of Champions (Touring Car),  Proline By the Fire (Rock Crawling),  KO Grand Prix  (1/8th Onroad)  But I really hoping to get to Australia for the 1/8th Worlds if I can get it funded in time. Anyone…..Anyone??

LRC: Who is your pick for the upcoming ROAR Off-Road Fuel Nationals in Florida, and why?

Steve:  Hmm As we saw at Silver State I think it will be a battle between Tessmann and Maifield and I think Maifield has momentum winning the 1/10th worlds this last year 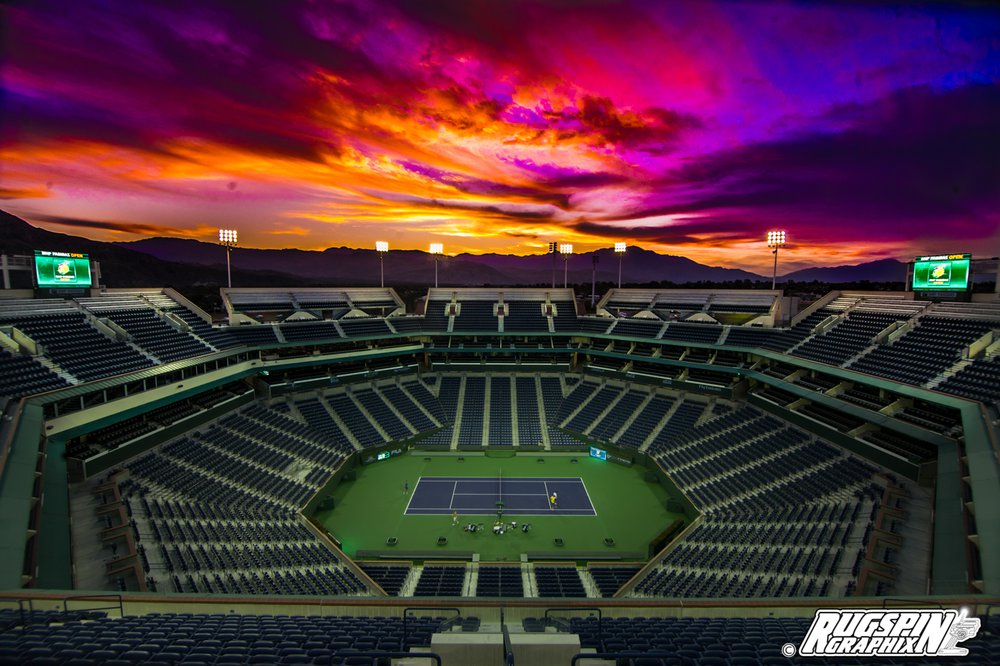 LRC: Tell us one thing most people don’t know about Steve Burgess.

Steve:  When I’m not at the R/C track, I’m a live sound engineer usually doing monitors at concerts for many major artists over the last 30 years.  I also designed the audio system for the 3rd largest tennis stadium in the world and am the lead audio for the BNP Paribas Open Tournament in Indian Wells and also the AVP Volleyball Tour

LRC: Thank you so much for joining us today Steve, we look forward to seeing you again soon, and keep up the great work! Is there anything you would like to add before we go?

Most importantly Keep RC fun, It can be serious but at the end of the day most of us got into this for the fun of it.