A MOMENT WITH MIKE: Tire Sauce - An Unnecessary Risk of R/C Racing 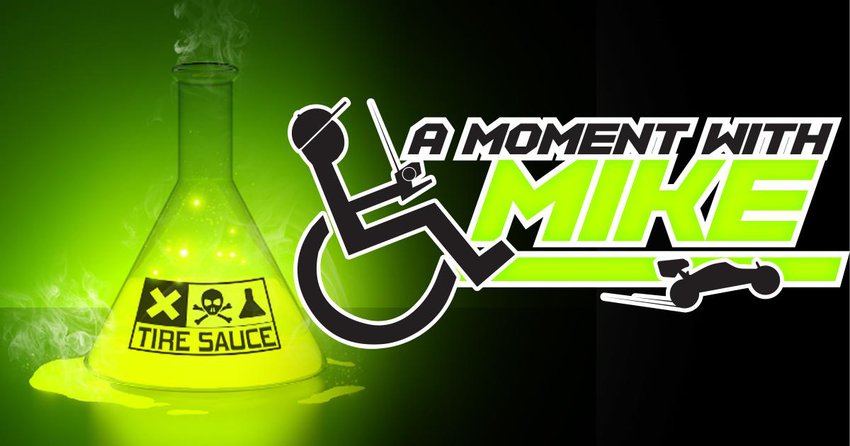 This past weekend in Monster Energy Supercross, heavy rains soaked the San Diego stadium and track. Track crews applied a drying agent to the track in hopes to help the track make a recovery. The track failed to dry out, however, the drying agents used have caused an uproar among racers as bikes are heavily damaged and many rider’s bodies are suffering from chemical burns ranging from faces, to arms, legs, and a little bit of everything in between. One rider named Tyler Bowers expressed his concern on Twitter by saying, “Soooo are we going to do something about these chemical burns on our bodies and our destroyed bikes or we just going to act like nothing happened.” 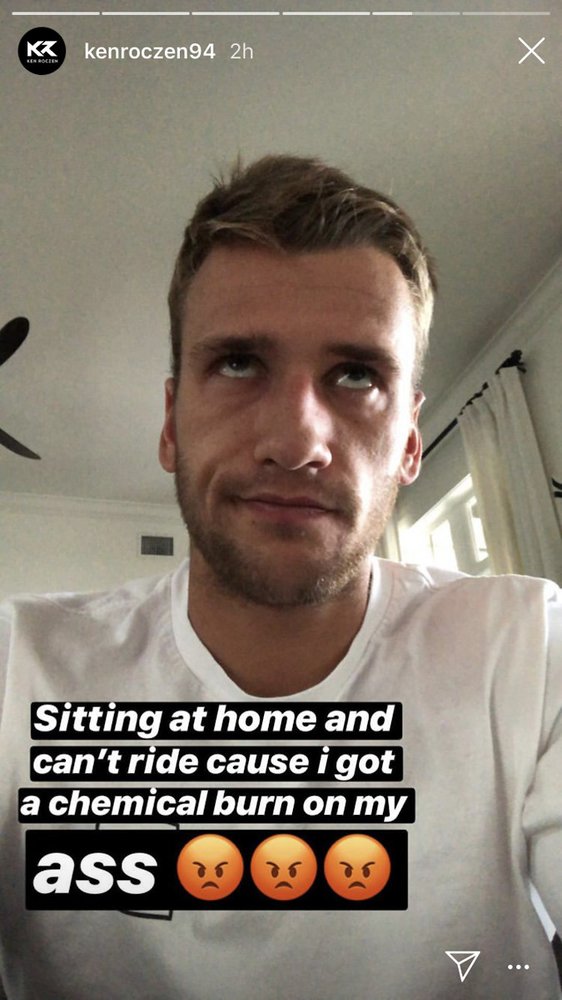 (Tyler Bowers, Ken Roczen, and Austin Politelli are just a few of many who are expressing their frustration over last week's supercross on social media.)

After a lower turnout than expected at a recent event, I asked several racers who were missing why they didn’t attend. I received the same answer more than once, “I can’t do a three-day race, it makes me sick every time.” With last week’s drying agents in supercross and talking with R/C racers who feel sick after attending multi-day races, I can’t help but think about the “unknown” dangers in R/C that we should be doing something about, but instead we continue to act like nothing is happening. There is a number of things in R/C that can be potentially hazardous to your health, however, in my opinion the number one risk/hazard is tire sauce.

To gain hundredths of a second worth of traction, we use tire additives - a.k.a. tire sauce. Depending on your local track, the tire sauce of choice may be an off-the-shelf penetrating lubricant such as Liquid Wrench, or perhaps one of the many “brand name” tire sauces containing a homemade brew which may or may not include everything from diesel fuel, brake cleaner, and belt dressing to mineral spirits, xylene, acetone, and/or everything in between.

I have several good friends in the tire sauce making business, and I’m not here to hurt anyone’s feelings, but in my opinion tire sauce harms the hobby more than it helps – literally. Have you ever read a safety data sheet for the R/C specific tire sauces on the market today? Probably not, because most are impossible to find – if they even exist at all?

Since I couldn’t find a safety data sheet for any of the most popular R/C specific tire sauce formulas anywhere online, we’ll look at a small portion of the SDS (Safety Data Sheet) for Liquid Wrench instead:

I don't think of Liquid Wrench as being that gnarly compared to some of the homemade tire sauce brews on the market, but reading through the SDS the manufacturer is recommending chemical resistant gloves, a chemical respirator, and adequate ventilation rates matched to the conditions during use.

When was the last time anyone used chemical resistant gloves or a respirator mask to apply their tire sauce? How many tracks are equipped with proper ventilation for nearly every driver in the building to be applying Liquid Wrench to their tires in a confined pit area before every race? What are the potential hazards for skin contact and inhalation when using the harsher unknown chemicals inside the other brands of tire sauces? 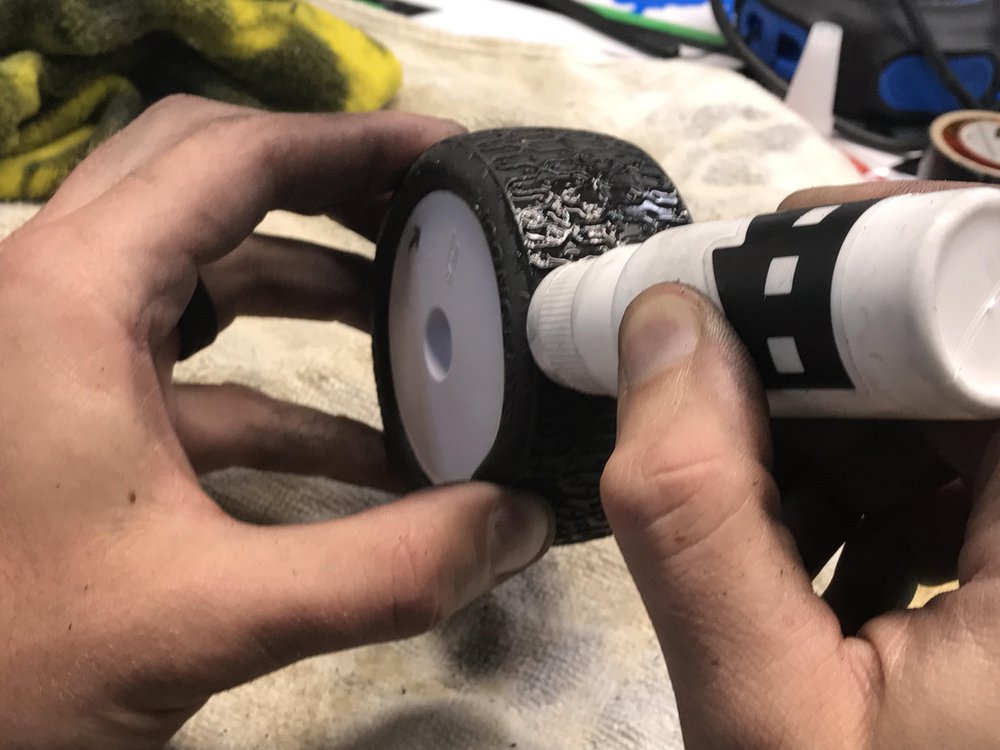 As racers, myself included, we are willing to ignore these risks, warnings, side effects and illnesses for potentially gaining hundredths of a second around the R/C track. My guess is that less than 5% of people racing R/C cars in the entire world receive a paycheck for doing it, yet 95% of R/C racers are willing to risk their own health and well-being, not to mention lifespan of their tires and inserts, in hope to gain decimals of a second off their time in a race.

Track owners ignore these risks, warnings, and dangers to themselves, their employees, and their customers by using the excuse “there is no way to police tire sauce” to keep from banning it. I agree, policing tire sauce is very difficult, but not impossible. How is enforcing a tire sauce rule any different than enforcing a no alcohol rule? If you put a ban on alcohol at your facility and you get one guy who breaks the rule by sneaking Vodka in his coffee cup, there are three scenarios:

Why is this any different than enforcing a no tire sauce rule? If you catch them with sauce before racing, ask them to pour it out, put it away, or leave. If they use it and get caught by the distinct smell, visually seeing it, and/or the tracks left behind on the racetrack from it - disqualify them or kick them out. If they somehow never get caught (which they will, especially if it truly enhances their performance), the inhalation risks are MUCH lower if 1 racer somehow sneaks by with it rather than 100 racers doing it race after race - which is still a win for everyone else in the building.

Like an alcohol ban at the track, you cannot enforce a tire sauce rule at someone’s home, or when they aren’t at the track. This means potentially every racer can still sauce their tires prior to showing up, BUT the difference is they are putting themselves at risk on their own time at their own place, and not everyone around them at the track who is given no choice but to deal with it if they wish to stay and race.

R/C racing is not meant to be a high-risk hobby. It is meant to be a family-oriented hobby that anyone and everyone can enjoy without worry of age, ability, and/or the potential health risks involved. If long-time serious racers are making the choice to step away or avoid racing as often as they once did because of the effects it has on their health, how can we honestly expect new racers and families to assume those potential risks and take their place?