WHERE’S WALDO: How much is too much? 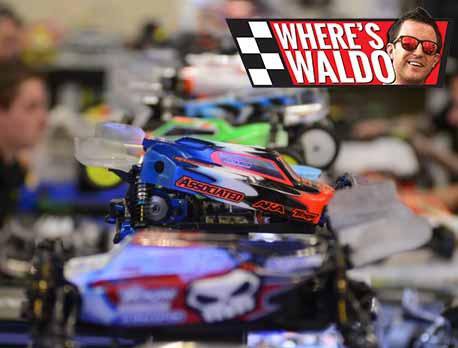 WHERE’S WALDO: How much is too much?
While you could argue that the 15 years separating the original Team Associated RC10 to the radical Team Losi XXX, or the rapid transition from NiMH to LiPo batteries and brushed to brushless motors, were eras of RC racing that shoved the industry forward by a greater distance, it’s hard not to recognize just how far the equipment has evolved since the early days of RC racing. Today’s cars are faster, are easier to drive, have more grip, and withstand greater forces. Twenty years ago, the only ready-to-run vehicles available included the most basic of running gear, and now you can get one that breaks 100 mph.
On top of that, the cars and trucks designed specifically for racing can be adapted, altered, adjusted, customized, modified, tailored and tuned more than the vehicles at any point in our hobby’s history. Despite unprecedented access to information from factory teams and setup apps, racers can just as easily dial themselves off the reservation with a few turns of a wrench. And not only are the kits themselves chock-full of shock mounting spots, roll center positions, and axle locations, but the aftermarket has exploded. There are multiple options for everything from bearings to wings, and a growing number of “must-have” drivetrain components that racers feel like they can’t compete without.
It’s that last part that might be an issue.
I don’t necessarily have a problem with the cost of competition — any hobby can be as expensive as you allow it. In the long run, what racers spend on their kits, electronics and hop-up items pales in comparison to the consumables like tires, spare parts and fuel, not to mention travel costs and entry fees. If the market catch fetch almost $500 for a motor and speed control, $400 for a 2WD buggy kit, $600 for a transmitter, $200 for a servo, $350 for a charger, $150 for a shorty pack, and $50 for a set of tires and wheels, then I don’t really see a problem with charging $110 for upgraded driveshafts, $110 for aftermarket bearings, $85 for a titanium screw kit and $20 for a cooling fan.
That’s not nickel-and-diming, that’s Franklin-and-Jacksoning.
The bigger cost, on both racers and the RC community, is the stigma that you shouldn’t bother trying to keep up if you don’t have something specific. Back in the brushed days, the “motor of the week” was a threat to checkbooks and bank accounts. Now we’ve got normal and lightweight bodies, wings of different widths, ballast weights of different types of metal, nearly two-dozen different tire compounds, and kit manufacturers introducing optional suspension components made of materials ranging from “Catholic church stained glass window” to “repeatedly-microwaved Tupperware container.”
Does a racer truly need every last aftermarket item to win a club race or regional title? Well, maybe - despite how everyone whose favorite team driver didn’t win last weekend claims the competition “could’ve driven a shoebox with wheels,” the performance and setup of a vehicle certainly plays a role in race results. Yet, as we’ve seen time and again, the instant that a local news crew points a microphone near even the most mid-pack of sportsman 50%-sponsored racer’s mouth, all RC racers can seem to talk about is how much money they’ve spent.
Sure — the companies in this industry have simply responded to the call of consumers, developing new and better products that give them the ultimate freedom to enjoy their time at the track, but falling too far down the rabbit hole of trying to appease the weekend warrior (and milk his savings account dry) further widens the gap to the uninitiated newcomer. Whether it’s expensive hop-ups or a near-infinite number of setup options, how much is too much?
Share:
blog comments powered by Disqus